Bernard Meredith Leffler is my Dad’s Dad, he was born in 1890 and married my Grandmother in 1928. He would die of pneumonia on my Uncle’s 21st birthday in 1951. I never met him and know very little about him or my Dad’s Mother Margaret Gardner Leffler.

I am thrilled to have his writings and in particular his book From Boatshed to Battlefield. I am looking forward to giving his story to family and friends as well as members of the world wide web. Most of all I’m looking forward to comments, stories, and feedback that I hope will reveal more of the character of Bernard Leffler.

My Dad, William Fredrick Van Blommenstein MacIntyre Patrick Leffler, is the eldest of three children. He was born in Salisbury, Southern Rhodesia in August 1929, his brother, Michael Leonard Leffler was born 18 months later on Valley Farm, Pretoria, South Africa and a sister, Mollie, who was born a few years later, would die of pneumonia three years later.

Here is a photograph of the three children with their nanny on Valley Farm, Pretoria, South Africa around 1935.

Dad and Uncle Mike were well read, loved poetry, rugby and cricket. They had an in-depth knowledge of both World Wars. My Dad told us how he and Mike had newspaper cuttings on their bedroom walls, following the different battles and tactics.

My Uncle Mike built a Rondavel at Thomas Moore School, Kloof which became the centre of a wildlife sanctuary. His Rondavel is similar to the one Bernard Leffler is standing in front of for a photograph in the Farmer’s Weekly. Uncle Mike inherited his father’s love of the bush and wildlife.

My Grandmother, Margaret Gardener Wilson, travelled from Dumbarton, Scotland, to marry Bernard in Salisbury, Southern Rhodesia in 1928. Legend has it that she had all her teeth removed before she set off for Africa arriving with a set of golf clubs to become a tobacco farmer’s wife. When my mother met Margaret in 1955 her Scots accent was still very strong. 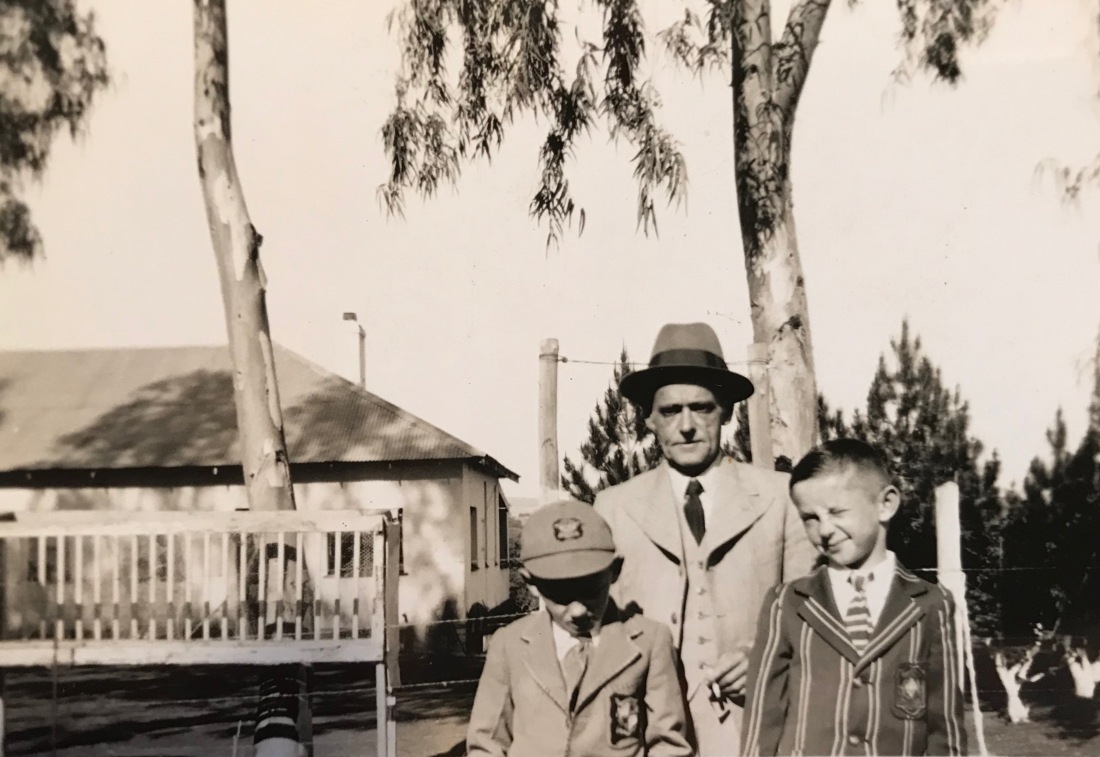 My Grandfather with his sons; Patrick on his left and Michael on his right.

Bernard Leffler’s parents were William Fredrich Leffler and Alice Van Blommenstein. William was a well-respected Registrar of Deeds throughout South Africa and a renowned organist. Alice came from a large ancient Holland family. They had six children and their home was always open to friends and travellers.

And now for the story…

5 thoughts on “My Grandfather, The Author”