End of 2nd entry: Spellbound the two lads gazed on the majesty and wonder of the old world – far beneath them lay thousands of human habitations – great churches, proud colleges, mighty houses of business, the huge dockyard and the homes of the wealthy.

Seen from the ramparts of the world a colony of Lilliputian race spreading over one of ten thousand valleys. Look where they would the work of man seemed but the tiny castles, the pygmy gardens, the little works of children playing amongst the wide sands of a far-flung beach.

“Makes one feel pretty small doesn’t it Mick?”, whispered the one. “Wait until you know the mountain as I do, be up there with the mists rolling over and the Sou Easter shrieking down the gorges – Man! I tell you a chap feels that a fly climbing up about the wall of a room can’t feel more tiny or lonely.”

“What you say about the mountain holds just as true about the sea,” replied Mick. “It must be pretty rotten up here in bad weather but to get really scared a chap wants to get caught in a howling Sou Easter or worse still by the North. The mountain’s big and strong I grant you, but what about the Atlantic when it lets itself go? I’ve been fooling on the sea for a couple of years now and to have funk properly shoved into you I bet the old sea can give the mountain long odds.”

Bertie grinned – “All right Old Man, you tell me that tonight – you haven’t done any rock work yet, but you will in a couple of hours and then we’ll see.”

Mick flushed, “I’ve been up to the main-truck of  Yankee Ship flying skysails, Old Chap. Over 120 feet, and I didn’t go through the Lubber’s Hole either. I bet I’ll climb any beastly rock you can.”

The older boy grunted, “Climbing masts and climbing rocks aren’t the same, you’ll see – bet you my Redskin and Cowboy against your jackknife you get funky before I do.” 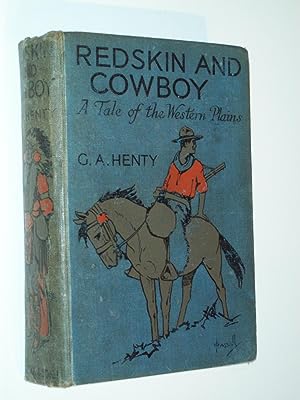 “Done,” said Mick expectorating in a fashion learned from American Sailors and the two cautiously crawled back to safe ground.

“I wasn’t funky there,” exclaimed Mick as once more he rose to his feet.

“I bet you were all trembly inside and your legs felt full of water,” said Bertie, “I did and I’m used to it.”

Micky gulped, “Well if you admit it, I admit it, but it isn’t funk – funk is when a chap starts howling before he’s hurt – like a three quarter passing the ball because he thinks he’s going to be tackled – feelings don’t matter as long as you tackle the job you’ve set yourself on.”

“Why did you ask whether Religion is true?” asked Bertie. “Of course it’s true – there are the Bible and all the churches and parsons to prove it.”

“Bibles, churches, and parsons don’t prove Religion” replied the youthful skeptic – “What about the Muhammadans – they’ve got the Koran and it’s a blooming sight more sensible – take the Old Testament, it’s all parables and there’s nothing clear – not the way the churches teach it anyway. I’m going to find out what the Roman Catholics teach, I bet they know better than all these blighters.” Bertie gazed fearfully upon his companion, “Stop it Mickey, man – it’s bad luck to talk like that on the mountain – wait until we get off – one never knows anyway and I’m not taking risks. If God hears you he might let a bit of rock break when you’re climbing and then you’ll go straight to Hell.”

Mick looked thoughtful, “I know it’s the same at sea, I wouldn’t go arguing about God if I was in a Sou’ Easter, but all the same, I want a God, one I can see and hear like the Sun or the Old Viking Gods of  Thor and Odin.”

Bertie moved away from dangerous ground – “You take the Claremont side Mick and I’ll keep straight on – bet you I get more disas than you do.”

“Bet you, you won’t,” replied his chum and the boys took to the moor again.

3 thoughts on “From Boatsheds to Battlefields 3 Thoughts on Religion”