This post links to the opening of the book where Mick is waiting and hoping that the Danish Captain will go fishing.

Excerpt from the opening post: A couple of hours past, then the day began to break but with the coming of light the prospects of putting to sea appeared negligible. The wind was blowing strongly, and beyond the line of breakers, the Atlantic was a flecked mass of curling, breaking waves racing shoreward. Surf combers were immense and the narrow rocky channel was a churning mill-race.

The coloured crew of a fishing boat after a look at the sea began to swing their boxes of fishing tackle on their shoulders preparatory to moving off home. Mick to his disgust heard his skipper tell the crew that it was hopeless attempting to put out.

“If I vos get a crew I vos going mit mine pram.” said the Dane “I haf mine son Teedore and I want another two men.”

“Yes you can come, Mickey, and Otto, he vas not frightened. No!” and the burly Scandinavian gave a huge roar of laughter.

A strongly built youth answered that he would go and amidst a number of warnings from others a queer-shaped Scandinavian boat was carried to the water. 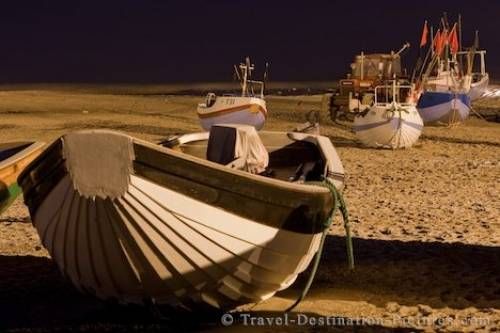 Though light enough to see, the night yet clung to the world helped by banks of dark cloud and grey mist piling and rolling over the sky and mountains, now and again came a drizzle of rain and the squalls of sea wind drove spray high from the waves.

As the boat was run into the water Mick jumped into the bow, Theodore Jansen and Otto went amidships. Old Jansen shipped a steering oar whaleboat fashion over the stern, shoving the stroke oar with one hand, whilst steering with the other. For a while the crew pulling gently held the boat head on to the breaking surf, keeping just floating distance off the shore. Whilst Jansen carefully watched the rollers breaking on an outlying point along the coast. The small crowd who had decided to stop ashore gathering at the water’s edge watching and shouting advice and warnings. 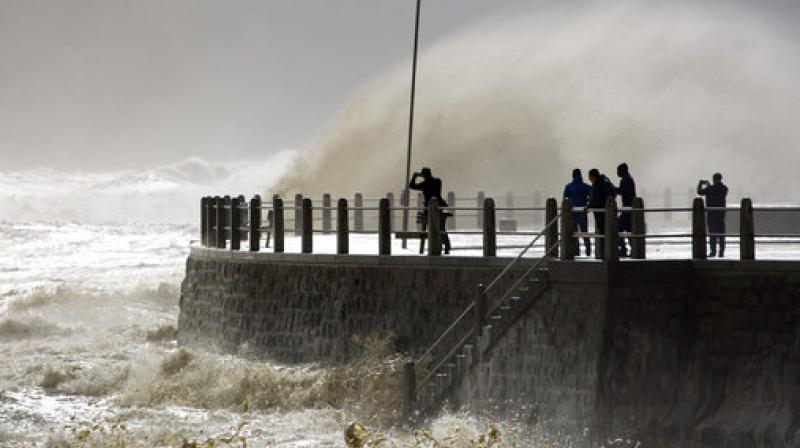 Suddenly the Old Dane gave a wild yell, “Pull togedder Boys! All you can! Pull Boys Pull!’ Four backs bent double, stout ash handles bent and the light craft, her queer blunt nose high in the air went racing seawards rising to, and smashing over and through a dozen waves – rolling to cross-currents, and standing almost on her stern to crash over a wave crest, taking a curling breaker fair and square a cascade of spray and water over her crew.

Old Jansen his light blue eyes pinpoints of flame, his long mustache blowing past his face bellowed encouragement whilst his great hairy arms and chest bulged with iron lumps of muscle as he stood half steering and pushing. Mick and the others a red mist waving before their eyes, muscles cracking with strain bent forward and backward with every sinew, every nerve, every muscle concentrated to breaking point.

“Easy all!” yelled Jansen and four figures relaxed and looked shoreward. They were beyond the breaking point of the rollers, but the tiny boat seemed to have broken through one great peril to enter a score of others.

All around were thousands of angry waves rising sullenly but quickly to hang an instant, draw suddenly back; then rearing a foaming white crest drive forward and down in a roaring angry mass of foam and broken water. The rollers themselves were range upon range of mountains, up whose ridges the boat was drawn to hang dizzily an instant before dropping down to the depths, whilst rolling down on it would come another vast wall of grey water.

Mick felt his stomach rise and fall with the combers – one minute the tiny boat was high in the air, and from her whole foreshore to the very water’s edge could be seen – another minute and the craft lay deep in a ravine with a mountain leaving them and one bearing ominously down – over the departing hill all that could be seen being the swirling mist and clouds about the summit of Lion’s Head and Table Mountain.

A sharp order from Jansen brought the oars again into play and with an empty feeling, Mick bent to his work. For a while, the Old Viking held seawards then gave the commands to “Hold Water” and “Anchor”.

Being a good deal further out the swell was not so marked nor the sea as broken as in the surf line and Mick whose marrow had felt turned to water began to feel his spirits revive. Lines were soon down – each cast a light mackerel line a few yards away without a sinker and two heavy lines each with a large hook baited with a half Mackerel and loaded with heavy leaden sinkers were dropped overboard. Light lines were also put over and lowered to the ground in case any small fish such as Hottentot were about and these soon began to be busy.

The oval bronzed Hottentot fish weighing from one to six pounds biting freely. Now and again a small shoal of Mackerel or their cousins the Maasbanker gave a few exciting minutes, during which every hand was hauling in fish as hard as he could. After a while, Jansen ordered the mackerel lines in as the fish were practically unsaleable and more than could be used as bait had been caught. Suddenly one of Mick’s big lines began to tighten, quivering with anxiety he got hold and felt it sucking heavily from him – Jansen leaning forward shouted to him to give line slowly until the fish ran – all at once the line pulled strongly.

“Strike as hard as you can!” shouted Jansen and Mick obeying felt as though he was going out of the boat. With all his might and with all his strength the lad hauled at a heavy fighting monster. The sweat poured off him, the line cut into his hands but lost to everything but the mad joy of battle Mick brought his victim slowly but surely towards the surface, until with a swirl of backwash a great salmon like fish broke water.

With all the power left in him, helped by the impetus of the fish’s dash Mick brought his quarry over the side and like a flash wrapped his legs around it. Holding on like grim death with one hand to the soft wire between hook and line Mick grasped a short heavy bludgeon handed him by Otto and smashed blow after blow on the shapely head. The powerful writhing struggling stilled and absolutely exhausted Mick hand over the thwart, whilst Theodore and Jansen both began to haul like men possessed away Mick’s other line began to move. Mick grabbed at it and once more every aching muscle was working.

Jansen and his son with their mighty arms hauled their fish rapidly to the service, stunned them outside the boat and lifted them in – Mick using the last atom of his strength just managing to swing his into the boat and fall on it. For a few minutes fish and Mick were mingled in a wild wrestling bout amidst roars of laughter from the Danes and Otto – then seeing an opportunity Otto whirled a cudgel aloft and brought it crashing on the fish – as he did so one of his lines tautened and with an oath he clutched at it and struck hard – but no solid fighting weight rewarded his effort.

“Too quick and too hard,” said Jansen reprovingly, “like dis you must do,” and the skipper once again striking began to haul hand over hand.

The boat, however, was beginning to ship a lot of water and the weather was becoming wild and stormy. Again and again, curling waves broke against or over the boat until Jansen regretfully gave the order to haul up the anchor.

3 thoughts on “From Boatsheds to Battlefields 8 Fishing Adventure”