From 10th Entry: For long I had been a pet amongst them and often I had begged to put to sea and at last as they ran the boat into the water Jack, the skipper, shouted “Jump in Youngster!” and in a second I had tumbled into the stern sheets and was embarked on a great adventure.

Often I had ridden the rollers in imagination and pictured and felt in my mind the sensations of climbing the mighty rollers and rushing into their trough but now I found the reality far more wonderful and glorious than the wildest flights of dreamland had given me. Clambering into the bow I faced the breaking white horses, reveled in the salty twang and bite of the wind, caught my breath as a wanton wave smashed against the boat and buried me in foaming water and spray. 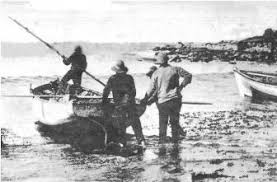 A couple of miles out we threw anchor and soon the crew were busy with fishlines and great was my delight at hooking and hauling in a few mackerel. But soon the smell of old half rotten bait, the violent pitching, and rolling of the boat brought on violent seasickness. However, the bout did not last long and when eventually we hoisted anchor and set sail for shore I had given myself altogether to the sea. A year or two went by and I went out more and more often. Barely a Saturday, or holiday but I managed to evade authority and get out to sea or wandered along the coast.

At twelve I entered the cadet corps and for a while took soldiering seriously for the Boer War was just ending. During the three previous years, I had seen and heard much of the rear lines of the fighting army. We were armed with old Martini-Henry carbines and often I smuggled mine out to sea with looted cartridges and practiced at seabirds, or hunted the mountainside for rare and strictly protected game.

Then came the present of a beautiful decked canoe, a craft seaworthy, unsinkable and able to stand fairly heavy sea. Every moment I could now steal was devoted to fishing and most of the catches I found little difficulty in disposing of to buyers on the beach. Other youngsters now took up the life and in a year there were a dozen boys rivaling the fishermen at their own game and with the daring of boyhood faring forth in weather the men feared facing. 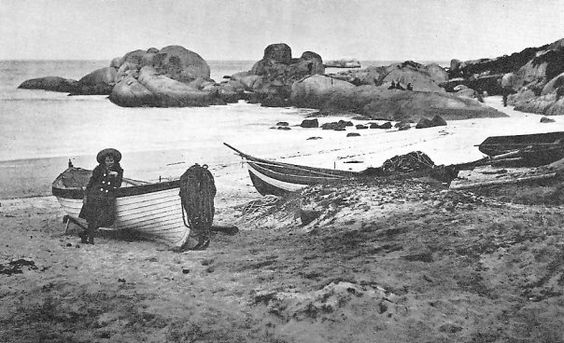 Our light canvas canoes, speedy easily handled and seaworthy dodged in and out of the channel when a heavy boat risked swamping ere she got full way on her and though often our canoes were capsized, now and again broken we all swum like fish and a most merciful providence invariably landed us no further hurt than bruises.

2 thoughts on “From Boatsheds to Battlefields 11 A Beautiful Present”