End of 16th Entry: “Only small stuff biting today – What say, Jack, shall we run out to a Silverfish mark?”

“Dunno if Silverfish bite in the afternoon” answered the bow – I don’t hold with fishing in the afternoon – seems to me fish rests after dinner time, don’t blame ’em I don’t.”

The Skipper laughed “Anyhow there’s a good breeze so we’ll walk down.”

In a few minutes lines were rolled up, oars stowed and at “All hands to the anchor!” the crew hailed onto the heavy rope the boy hauling with heart and soul, feeling that indeed he was a man of the sea and no idler.

The anchor up, came what to the boy was the best of all – the uncasting of sail covers, stepping of the mast and making fast the runners – then, at last, the jib and mainsail unfurled, the jib made fast, the sprit shipped up went the big mainsail, healing over the boat dashed through the water sending the spray flying over the crew – absolutely terrified the lad saw the lee gunwale buried in angry seething water, heard the crash of bow meeting wave, and hanging desperately to the windward gunwale felt the stinging bite of spray and wind – for a few moments he could but cling with wide open eyes feeling death’s icy grip upon his neck.

“Come back aft Mick” he heard the Skipper shout and as one returning from afar and strange land he looked round to see the crew lying comfortably smoking apparently feeling safe as ever.

Instantly the boy’s faculties returned and crawling back from amidships where he had been trying to help make sail, he crouched next to the Skipper. “Cold Youngster? Shove this on.” and the fisherman handed the boy a sea stained jersey.

Proudly Mick donned the garment which, though it would have held a dozen of him, was warm and thick; besides possessing the merit of being a real fisherman’s property.

“I was awfully scared when the boat keeled over so.” He confided rather anxiously, wondering whether confusion would cause the Skipper to think him a coward.

“Well you didn’t look scared which is all that matters, son.” answered the other, “everybody gets scared at times but the man that’s a real man doesn’t show it. Take sailing in a hard gale, the Skipper sees a heavy squall coming – there’s a toss-up whether the boat can stand it, carrying the sail she is, he’s scared white and his heart’s feeling like jelly, but he’s got to light his pipe and look as though its fine fun, if he lets fear get him beat his crew see he is afraid. Everybody would lose his self-confidence and when the squall struck, ten to one the Skipper would do the wrong thing, or a frightened man might grab hold of the tiller or sheet – and over would go the boat.” 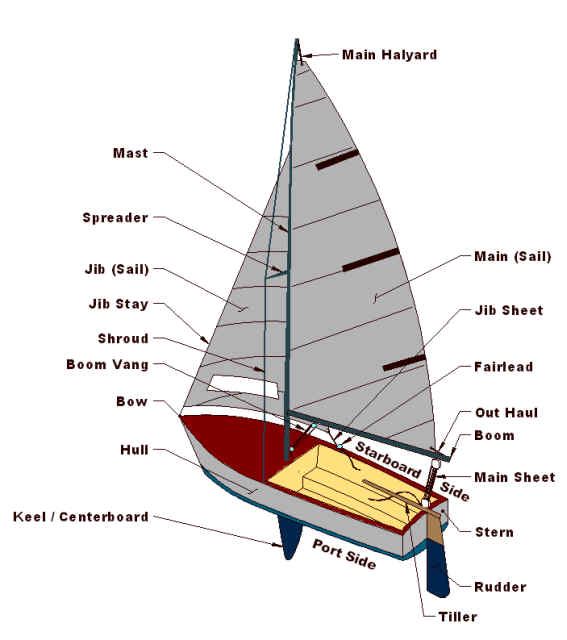 “It’s the same with everything in life – we’ve all got the same weaknesses but the man that can master them can master men. Take old Jack there – you’ve seen him drunk – well that’s because he’s like a boat with a skipper, a squall strikes him, that’s a bit o’ money in his pocket and an open bar door, Jack gets frightened so instead of holding on he casts off his mainsheet loses his way – and Jack swings broadside and over.”

“Avast there” shouted the old fisherman “Taint decent to be making fun of a grown man afore a kid.”

Meanwhile, the boat flew like a bird across the wind, white-crested wavelets rose and fell crashing and hissing around, a few penguins swam easily behind hoping for scraps of fish and offal, now and again a magnificent Malgas, the lesser Albatros, swooped low; rose, high towards the heavens, poised an instant. Then sweeping through the air like a bullet, dived deeply into the sea, clamoured and shrieked, now and again the snakey head and long neck of a cormorant rose like a periscope above the waves.

Landwards lay ranges of grey haze shrouded mountains, white beached bays and broken cliffs – houses to cling to hill slope or rested amongst the pine woods between sea and hill, along the shore a mass of white surf and distant thunder told of the meeting of the Atlantic Ocean and African Continent.

“Now Mick” called the Skipper to the boy who had clamoured back into the bows, his fears vanished and his whole being thrilled with the joy of life, “Come aft and tell me how I must steer to get on the bank.”

Quickly working his way back the eager youngster looked shorewards.

One thought on “From Boatsheds to Battlesheds 17 Mastering Fear”