Far in the distance hung a black pall over the earth Mick seated on the balcony between two railway carriages gazed at it with a sinking heart and turned the half-crown in his trouser’s pocket.

Under the pall lay the wonderful Rand, with Johannesburg, the City of Gold and Michael Osmond, fully determined that never again would the call of the farm stir any chord in his being except disgust, had invested what money he had in a Third Class ticket from Carnarvon to Johannesburg.

The drought had hit Mick’s employer hard nor had Mick proved what he wanted – a young fellow willing and anxious to take over from Kruger with whom he had long been dissatisfied though being his brother-in-law it was not easy to find an excuse to dispense with him.

Mick determined to face anything rather than confess failure decided to try mining and so into the North he went.

Mr. Osmond received a long heartbroken letter telling him that for the fourth time Mick had failed – that he now realised what a sinner and waster he had always been but that he would no longer be a burden or a worry. He had chosen his path and until he emerged successful the family would never see or hear of him.

On the train, the conductor coming round called Mick’s name and on his answering gave him a telegram which in a few curt words directed Mick to call on a Mr. McLeod at the government offices and ended with love from Dad.

Gulping down a rising flow of emotion Mick put the telegram in his pocket and gave himself up to musings on the wonderful comradeship which had always existed between his parents and self.

Mick had two girl chums in Johannesburg – sisters one of whom was married to a mining surveyor. These two girls were of a family of nine who in Mick’s childhood had lived next door to his parents. In after years one of the St Julian boys and Mick had met as fellow students and the acquaintanceship of early days had been renewed.

For years the St Julian family had divided the affections of the boy between his home and theirs. They lived six miles away in the Cape Town Gardens suburb but evening after evening Mick had cheerfully tramped over the Lion’s Hill or round its slopes to visit them.

He had the girl’s address and when at last the train drew into the station of one of Johannesburg’s mining suburbs Mick alighting invested his half-crown in cab fare to the home of his friends. 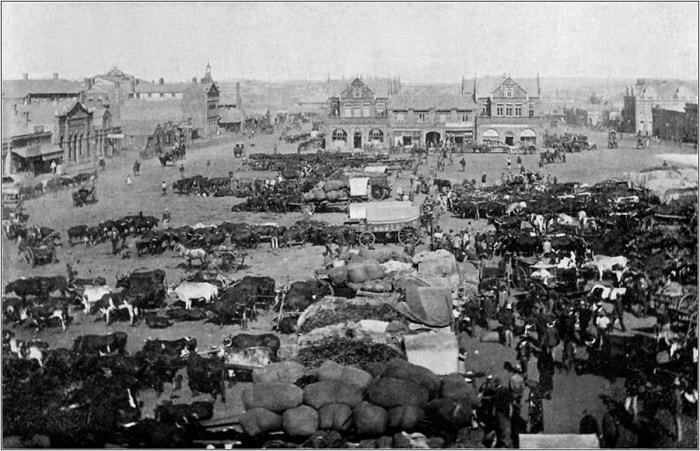 As luck had it they were at home and a hearty welcome was accorded the youth by Marie the married girl, Muriel her sister and O’Donovan, Marie’s husband.

Now the St Julian’s were a most Bohemian family. The father a titled descendent of one of the greatest houses of France had come out to Africa in the middle of the nineteenth century and had met and married the daughter of a famous Highland family.

From this union came six beautiful talented girls and three boys. Marguerite the eldest had clandestinely married her music master, Marie eloped with a college student. Aileen after a desperate battle with her parents had married a young Civil Servant. The three unmarried girls had been greatly sought after but by some queer twist of Fate’s strings, every girl of the family received her choice of eligible suitors and eventually married the youth whose present and future prospects were negligible.

The old Cape Town house as Mick remembered it had always swarmed with College students. Many of the girls’ old lovers were already holding important mining, agricultural and legal positions and in coming to Johannesburg Mick had felt that one of the erstwhile mining students would be only too pleased to give him a billet.

The first evening at O’Donovan’s he found a rude awakening was his. O’Donovan himself had no permanent billet and was eking out a bare hand to mouth existence. Their most influential friends were mostly married and their wives had seen to it that the husbands played no further part in the St Julian’s lives. One or two who yet remained bachelors bore grudges over disappointed affections and in short little was to be hoped for from any of them.

Though the O’Donovans themselves had scarcely the wherewithal to buy food and pay the rent and were burdened with Muriel’s presence as well, yet they laughingly told Mick not to worry.

There was no bed to offer him but he could camp down with O’Donovan with what coverings they could scape together. What there was of food he was welcome to his share of and something would surely turn up.

At dawn the next morning Mick set off in quest of employment. From one mine to another he tramped interviewing Mine Managers, Mine Captains, Cyanide Managers, Battery Managers – always to meet the same answer to his queries.

“Sorry Son, if you were a fitter or a tradesman of any description I could fix you up – try the offices in Jo’burg they might take you on as an underground learner.”

After spending the whole day in visiting a dozen properties Mick returned to the O’Donovans, sorely disappointed, ravenously hungry and weary to the bone.

Next day he tried the town offices – alas no learner accepted who hadn’t matriculated – another round of fruitless visits and then once more back to his friends.

The third day Mick decided that however bad his own plight might be he could not retain any self-respect by remaining with his friends. Knowing that they would scornfully repudiate any idea of his presence adding anything to their expenses or making any difference, he told them that a friend of his fathers had invited him out to his place and hoped to find him a job.