End of 35th Entry: The third day Mick decided that however bad his own plight might be he could not retain any self-respect by remaining with his friends. Knowing that they would scornfully repudiate any idea of his presence adding anything to their expenses or making any difference, he told them that a friend of his father had invited him out to his place and hoped to find him a job.

So on the fourth morning, Mick once again ventured forth. Night came and the youth now entirely desperate flung himself down in a little pinewood and sobbed his heart out.

In four days he had had one meal a day and that mostly a scanty one – he had interviewed a hundred men without receiving one word of encouragement or hope.

As he lay on the fragrant pine needles a boot kicked him in the ribs and turning over Mick saw a ruffianly individual regarding him.

“What’s the matter Sonny?” asked the tramp Mick explained and the man laughed.

“Just starting to find life ain’t all that it’s cracked up to be. Come spit out your whole history kid and let Uncle think what’s best to be done.”

The man’s voice was kindly and accustomed to fish and mountain folk as Mick was, he saw nothing to alarm him in a rough exterior. Mick was young but he numbered some tough acquaintances in his circle of friendship and he knew that nobody was likely to hurt him if there was nothing to be gained by it.

So the boy explained the circumstances which had brought him there giving the impression that he was a farmer’s son – the father had been ruined by the drought and in consequence, Mick had been thrown on the world to make or break.

After relating his experiences in seeking employment the boy heard a sarcastic balancing of his mental abilities. The Tramp wanted to know why he hadn’t gone from one business house to the other seeking employment – Buttons, errand boy, office boy, junior assistant, stable boy or anything else.

“With your build and weight and being from a farm the Racing stables would have jumped at you – going to the business firms you’d have had a choice of a hundred jobs – and you damn little fool, you go hunting round on gold mines where there isn’t a hope for a kid. What the hell use would you be on a mine? The Batteries, all the Reduction Works are run by learner labour but the learners are all College youths who have matriculated – the only non-Varsity men are miners and tradesmen and they employ Blacks to do the rough work. If you want to go mining get a job in town so that you can live, then get to know miners and mine tradesmen, and when through one of them you hear of a decent thing, go to it.”

“Well I guess you’re pretty peckish and so am I – came out of goal this morning – six months hard for battery and assault – anyway I’ll go down and get some food and we can doss down here – you needn’t be frightened kid I won’t hurt you.”

Mick assured his new friend that fear had not entered his mind and promised to remain where he was until the ex-convict returned.

As darkness fell Mick lay under the trees wrapped in an overcoat he had luckily bought and gazed at the flaring headlights of a score of the world’s greatest gold mines – all around shone thousands of lamps and lights and the night seemed alive with the thunder of stamps crushing the rich gold ore and the volleying crashes of trucks emptying their loads of refuse rock or delivering gold-bearing quartz to the tube mills and stamp batteries. 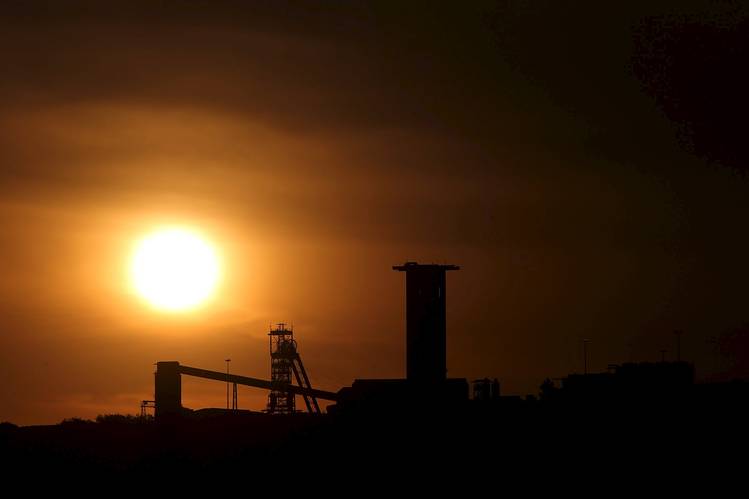 Hungry and overtired the lad found the feverish activity around him soothing and lulling so that when laden with eatables the man returned he found a boy curled up fast asleep. Waking him the man laughingly invited his young guest to a supper of cold roast fowl, thick slices of brown bread heavily buttered, with a can of hot sugary tea to wash down the feast. A cigarette completed Mick’s satisfaction with the evening’s entertainment.

Next morning on his companion’s advice Mick set out for one of the great racing establishments but on his way passed through City Deep Mine – more out of devilment than anything else he paused at the Reduction Works and asked a man who appeared to be one of the bosses whether there was a job going.

“7/6 a shift on the Excavator, start right away.” snapped the man who happened to be the Cyanide Manager.

“You look half starved, had any food?” asked the manager rather less abruptly.

The man scribbled a note on a leaf of his pocketbook, “Run down to the office with this – give them your particulars and you can get over to the boarding room and wade in – the office will give you a room if you want one and fix you for meals. Report at the Excavator to Roberts the shift boss and get started as soon as you can – if you have any pals I can take on half a dozen men for surface work. Righto Son.”

Dismissed Mick once again an eager boy brimful of happiness skipped off to the office.

Here a document was read to him. He was engaged as a Reduction worker at 7/6 per shift. He would be provided with a room at 10/- per month, board at £6. 2/6 per month would be deducted towards Reading and Recreation room and 15/- towards the medical and Burial fund. In the event of death, he would receive a £15 funeral. Overtime would be at a rate of time and a quarter – eight hours notice on either side could terminate the agreement.

Overjoyed Mick signed the contract and being provided with a note to the mess caterer ran over to the mine boarding room.

Here he found a score of long tables piled with great platters of bread, hot scones, buns, and cakes – dishes of butter and jars of half a dozen jams were scattered over the board where scores of men were eating as he had never seen men eat before. As he paused a waiter came to him, took his note and showed him a vacant place handing him a menu which appeared to contain the names of every dish Mick had ever heard of.

Giving an order for bacon and eggs he turned to look around. The seats were only half filled but their occupants were well worth looking at. Every race seemed represented, every man appeared ravenous and all were uninformed in blue copper rivetted dungaree trousers, heavy boots and dark blue and white striped boiler shirts – many were black with oil and grease, others white and yellow with dust and mud. No-one had appeared to have bothered about washing face or hands and to Mick, the whole crowd looked the toughest set of hard men he had ever seen, or read of.