End of 36th Entry: No-one had appeared to have bothered about washing face or hands and to Mick, the whole crowd looked the toughest set of hard men he had ever seen, or read of.

Little time, however, was given for him looking about – the waiters seemed possessed by demonical energy and hardly had he given his order when his wants were supplied. As the waiter put the food before Mick he asked what shift the lad was on and what he wanted.

Stopping the work of mastication Mick asked what the other meant and found that mine shifts were 6am to 3pm, 3pm to 11pm, 11pm to 6am. Breakfast was from 6am to 9am. Lunch noon to 3pm, dinner 6pm to 9pm, so that except when on the second night shift one of the three meals would be missed and in its place the mine provided a can of tea, coffee or cocoa and a parcel of sandwiches.

Asking the way to the excavator Mick was directed to a line of immense iron tanks – on either side of these ran a single line of rail on wooden platforms high above the ground. Over one of the tanks stood an engine puffing vigorously and on asking for Roberts he was directed to the engine. Here he found a worried looking man cursing fluently at the engine driver who retorted in kind. Seeing Mick the two looked round.

“What the Hell do you want?” asked the worried man.

“I’m Roberts – no bloody Sirs or Masters here there ain’t.”

“I’m Osmond, told to report to you for work,” answered Mick.

The worried man flung his hands to Heaven and blasphemed freely.

“A kid in a choker collar and pretty suit, a man five feet four high and five feet round the guts, thirty years in a Haberdasher’s shop whatever the Hell that is – a Dutchman six foot seven inches high that’s a bloody telegraph pole, two half-starved rats from gaol and one tank ahead of the Battery with only two men beside the trash heap.”

Turning to Mick he told him to come along and dashed off.

The engine driver winked at the lad who grinning scrambled after the worried man to a little office where Mick was implored to throw away his collar and tie, discard his coat and waistcoat, sign his name and the time in a large book, and come along.

At another little room, Mick was issued with a four-gallon tin of grease by Roberts, led back to the tanks and shown a wide belt revolving rapidly under the tanks.

“The Excavator’s got four beams each with a score of big iron discs,” said Roberts “after the cyanide solution has drained away from the tanks the excavator comes along and ploughs the slimes throwing them to the centre of the tank. The stuff drops down a hole on to this endless belt which carries it to the headgear over the dump – the headgear is 120ft high and damned slippery. Your job is to walk the length of the belt to the top of the distributor and keep the grease pots full – there are two thousand of them and God help you if I come along and hear a squeak – I’ll chuck you over the side, I bloody well will. Now you know your job – get on like Hell. Just a moment – this is all new-fangled machinery which nobody understands and the damned excavator is always choking – if you hear the engine whistling run along and give a hand to free the discs, Savvy! Away with you then.”

A fortnight passed. Mick found the work hard but not monotonous for as the shift boss had prophesied the excavator discs were continuously clogging and the scratch gang hastily engaged to work on the new plant were continually being rushed into a tank where with picks and shovels they laboured furiously under the lash of the shift boss’s tongue until the wet sticky masses of slime were picked and dug from between the discs.

Ferguson the Irish engine driver was no man to waste time and at Robert’s shout of “All Clear” would instantly put the engine in action the long beams would slowly move and the numerous discs revolve giving little time for the working gang to scramble on top of the moving beams and from thence climb out of the tank.

It needed no little agility and there were some hairbreadth escapes from a horrible mangled death but Mick could not restrain his delight at the telegraph pole Dutchman and the stout Haberdasher, desperately leaping for the beams and from them despairing attempts to spring to the tank edge to haul themselves to safety. Both Ferguson and Roberts delighted in the agonies of mind and the queer contortions of the ill-matched pair and were never so happy as when one or other missed disaster by the very skin of his teeth.

However, the shift soon became accustomed to the work – the Haberdasher’s corporation diminished daily and the hop-pole seemed to broaden and thicken. Mick’s only complaint was about his sleeping quarters. He had been given a beautiful little room with electric light and a fireplace but otherwise as bare as when the builders quilted it. With a thin raincoat, sweat-soaked garments, no blankets and not even a towel it was pretty miserable after work.

Mick hadn’t a penny – his suitcase contained only spare shirt and socks and nights were bitterly cold. Tired as he would be after a shift of hard manual work – and in his first week he put in 35 hours overtime – it was impossible to sleep on the cold hard boards with nothing under or over him. The nights were inexpressively long and when the hooter went for a change of shifts Mick felt more dead than alive.

He had started at the beginning of the month and somehow the thought of applying for an advance never crossed his mind. He was too proud to confess his misery to his companions or superiors and doggedly tried to fight out the month planning in anticipation what he would do with the money he would draw at the end. Blankets, working clothing, towels, soap – Jove he would have ten pounds with all the overtime.

But Mick was young and impulsive and his companions except for Ferguson were wasters. Knowing that any stoppage of the excavating process would hold up the Battery with its nine tube mills and hundreds of stamps, the shift persuaded Mick to head a deputation to ask for an increase of pay – gallantly Mick interviewed the much-harassed Cyanide Manager – received a clout which made his ear ring, and whilst he saw his mates disappearing back to work, he himself was led to the office received what money was due to him and with some seven pounds sorrowfully wended his way from the mine. 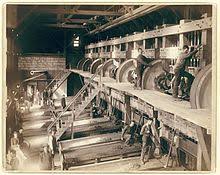 As he took his way towards Johannesburg the boy felt as though a landslide with himself as the principal figure in it had taken place. The life had suited him well, Ferguson, the engine driver and Roberts the shift boss had both treated him kindly and he had been taken from greasing to help Ferguson.

There were developments proceeding daily on the Reduction Works and Roberts had assured the lad that any day he might be able to snap up a position worth having – another fortnight and his troubles would have been over for his cheque would have been sufficient to clothe and equip him fairly well.

Bitterly the lad cursed his easy-going nature and lack of caution. He had had no complaints, he was well satisfied. Why oh, why had he let himself be a tool in the hands of a rotten crowd of shirkers?

£11.5 per month almost doubled by overtime and one of the first men to be employed on a modern type of plant certain to be introduced on every mine on the Rand. What a damned fool he was.

2 thoughts on “From Boatsheds to Battlefields 37 Walking The Belt”