The book From Boatsheds to Battlefields covers Bernard Leffler’s life story from a happy childhood in Cape Town to enlisting in the First World War from Southern Rhodesia and seeing action at Delville Wood.

Today is the 17th of July 2018 and I have let slip a number of potential anniversaries for the publishing of this book.

My aim is to have the whole book on lefflerstories.com by 15th of  September 2018. 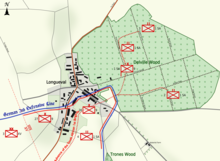 The Battle of Delville Wood was an operation to secure the British right flank, while the center advanced to capture the higher lying areas of High Wood and Pozières. After the Battle of Albert the offensive had evolved to the capture of fortified villages, woods, and other terrains that offered observation for artillery fire, jumping-off points for more attacks, and other tactical advantages. The mutually costly fighting at Delville Wood eventually secured the British right flank and marked the Western Front debut of the South African 1st Infantry Brigade (incorporating a Southern Rhodesian contingent), which held the wood from 15–20 July. When relieved the brigade had lost 2,536 men, similar to the casualties of many brigades on 1 July.[32]