End of 43rd Entry: Then a boat hoisting sail set her course for Table Bay. Instantly the fleet ceased its fishing and in a few minutes, every boat was racing for the markets.

The Easterly wind had dropped soon after snoek had been biting and until noon the sea was like glass – as soon as the boats started off home, however, a strong Westerly wind was coming down, and with a good beam wind the ‘Violet’ went crashing Sou’ West through a welter of rushing white horses.

Soon the coast a mass of black jagged rocks rose threatening before her, but the skipper held on till near the breaking surf – then round into the wind swung the boat, hesitating a moment with fluttering canvas – the headsail filled and bore the bows round, and as she paid off the mainsail swung over, filled – and off went the ‘Violet’ roaring out to sea aslant the wind.

When well to the windward of the snow-white beach at whose edge the ‘Alice’ was already lying Violet’s skipper once again brought her head into the wind, round she came and with sea and wind behind went flying down on even keel and a little later a merry crew were casting fish after fish on to a pile. When the catch was altogether the crew shared equally, this done each man threw an eighth of his share to go to the boat’s owners.

“Three stockfish and thirty snoek apiece” quoth Mick gleefully to Jack as he turned to bargain with the Indian owner of a fish hawker’s cart – “Come on Sammy fifty bob the lot.”

“Me give twenty-five!” but eventually he paid thirty and retailed the lot at £2/5. 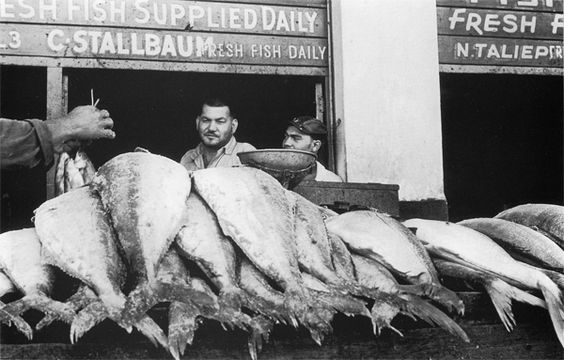 One thought on “From Boatsheds to Battlefields 44 Race to Market”