End of 59th Entry: The new destination was Prieska in the North-West of Cape Colony where forces were being assembled to operate against the Dutch rebels.

It is now October 1914. Throughout the Union, thousands of traitor Dutch had risen in open revolt choosing the time of Britain’s need to betray their oaths, their fellow countrymen, their race and their nation.

It was not like a rebellion of Irishmen against a foreign power holding Ireland by the might of armed occupation. It was an absolute fouling of their own nest by a traitorous section of a nation.

Beyers the Commandant General of the Union, Colonel Maritz, General Kemp, the famous De Wet with other leaders used their personal influence to lead thousands of ignorant Boers into the armed rebellion.

Fortunately, South Africa possessed honourable men worthy of the grand ancient names of Holland and France which they bore. General Botha, the Premier of South Africa, a man against whose honour, courage and wisdom no man, friend or foe has ever cast stone rallied the mass of Dutch South Africa – ably seconded by General Smuts, by many of the famous Boer generals and leaders of the old Republican forces who for three long years fought Britain’s might General Botha dealt swiftly and surely with the renegades.

Disdaining the leprous section who attempted to sit on the fence egging on the armed rebels but fearing to risk their own skins, General Botha and Smuts took the field in person.

De Wet and most of the leaders of the Free State and Transvaal rebels were soon in gaol, their bands were broken up and dispersed. General Beyers was shot whilst fleeing across a river in flood.  One or two brigands were executed and Kemp chased through the Kalahari. At Upington, he was surrounded but the loyal troops were forbidden to fire and he was allowed a chance, quickly availed of, to escape and link up with his fellow rebel Manie Maritz.

General Botha having then crushed the rebellion with the use of mostly Boer forces began to once more resume operations against the Germans.

Meanwhile, Mick’s train after six days of monotonous and wearing jolting arrived at Prieska late at night. The train had again and again been sidetracked for many a weary hour, all kinds of difficulties had been experienced in feeding and especially in watering the animals and the men were incredibly sore, tired and quarrelsome.

Their troubles ended with the journey. A fresh detail of transport men took over the offloading of the animals after their riding horses had been taken out of the trucks and guided by Head Conductor who had been in charge of Mick’s Cape Town depot, the party cantered through the town to where the whole staff of Transport and Remounts were billeted.

A smoking meal of fried steak, onions, potatoes and bread with unlimited whiskey and hot coffee awaited them at the Heat Conductor’s billet. Their wants satisfied the newcomers were then taken to billets Mick finding himself together with a companion detailed to a large house which contained a pretty daughter a girl of eighteen.

The quarters were good. The two men shared the guestroom sleeping together in a huge old-fashioned four-poster bed. Their meals were to be taken across the road at theHeat Conductor’s billet where a transport mess had been formed.

At daybreak, the morning after their arrival Mick and his mate on reporting to theHeat Conductor had a Coloured batman detail to them and were told that when not on duty they were to remain in the vicinity of the mess so as to be handy if required.

Tens of thousands of animals – horses, mules, donkeys and oxen were being concentrated at Prieska. From dark, in the morning until long after dark at night the transport men laboured feverishly.

Every horse and mule had to be caught, branded and shod – every donkey and ox branded. Then came orders to shoe ten thousand transport oxen for work in the sandy desert country. Hundreds of transport waggons had to be greased, tens of thousands of pieces of harness buckled together, teams of sixteen mules, twenty-two donkeys or sixteen oxen picked, caught and hauled out of hundreds of frightened kicking, struggling animals. 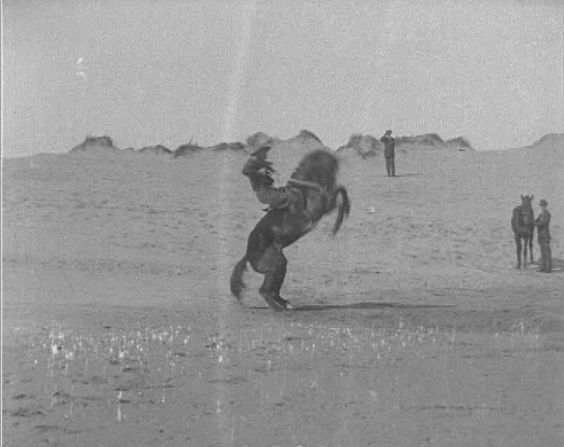 Mick found the work intensely fascinating. Now he was amongst a wild excited mob of mules selecting likely looking leaders, wheelers or couples for intermediate positions, helping to work the picked animals out of their plunging fellows into a corner – quietening them or getting them jammed until halters could be slipped over their heads –  hauling them away to be shod and branded, then escorting the animals to where a long line of waggons stood ready to have them inspanned.

It was dangerous exciting work with numerous casualties occurring through men being kicked, trodden on or savaged. Half the animals were fresh from the farms the buck wild untrained things that had never known halter or harness. What Mick enjoyed the most was the watering of the horses. Twice daily a strong body of mounted men, Conductors and Basutu rode up to the Remount paddocks. Mick himself being the lightest weight took the most perilous post.

Mounted on the fastest horse to procurable he rode before the gateway of the paddock and turned his horse into the road leading to the Orange River quarter of a mile or so away. The other mounted men meanwhile forming a line either side of the road.

The gates were flung open Mick started forward and three to four hundred horses pouring from the paddock galloped after him, with a score of mounted men riding hard on flanks and in the rear cracking stock whips and shouting.

The road was worn, full of ruts, stones and other pitfalls – behind were hundreds of horses galloping with tossing mains and streaming tails – a slip, a stumble, a fall and Death was certain; but what youth ever realises the meaning of danger.

Singing, yelling, Mick bending jockey fashion used the whip and spur without stint exalting in the wind howling past, the thunder of the great drove behind. The Orange River loomed ahead – driving in spurs, sending the long cruel lash of his short handled stockwhip curling in a vicious stinging back twist under his horse’s belly he lifted the maddened animal to face the running stream.

The horse dashed into the water and almost simultaneously the following drove sent the spray flying as they to galloped furiously into the river. Swimming his horse around the mob Mick regained the shore, lit his pipe and chattered with his Mates until the drove was ready to once again gallop back to its camp.

2 thoughts on “From Boatsheds to Battlefields 60 Wild, Free and Dangerous”