End of 62nd Entry: On arrival, the Natal Light Horse were issued with fresh horses and rode to the railhead to entrain for Cape Town on their way to join the troops operating in Germany West itself. Mick with a few waggons was at the station eagerly chatting to some of the troopers when a spare clean-shaven man accompanied by two Dutchman galloped in.

“That’s Gill the Intelligence man,” remarked one of the troopers turning to gaze at him.

“What does he do?” asked Mick feeling his pulses throb.

“Scouts, guides, hangs about on the skirts of enemy forces. Damned exciting, but mighty risky life” answered the trooper.

Mick gazed with awe on the Scout who was talking animatedly to Colonel Royston. Finishing his report the Scout accompanied by his two men walked over to a tent which served as a canteen. Mick following him in received a nod and summoning up courage asked the others to join him in a drink this proposal was promptly acquiesced in and the Intelligence man entered into conversation with the Rhodesian.

To Mick’s amazement, he found the Scout another of his father’s numerous acquaintances, while excitedly he learnt that a large force of rebels was sweeping down on Draghoender.

“Lucky thing the Natal Light Horse have turned up,” said the Scout. “Old Kemp would have found a treasure store here – tens of thousands of fresh well-fed horses, mules waggons, oxen, stores of every description. He’s probably hard pressed by troops who have driven him through Bechuanaland and would look on a big Transport and Remount Camp as a gift from heaven.”

“You think then that there’s a chance about being attacked?” enquired Mick flushing with excitement.

“It will be a little short of a miracle if you aren’t.” Answered the Scout. “It’s a big country and though I hope we intersect them its long odds he’ll dodge the Natal Light Horse, sweep through the Transport; and off to join Maritz the other side of Upington. However, I must be a must be off.”

Swallowing another round of drinks the four left the tent to find the Natal Light Horse already detrained and in the saddle. As the Scout appeared Colonel Royston was in the act of moving off so with a wave to Mick, Gill vaulted into his saddle, his followers mounted more soberly and the three dashed off to the head of the column.

Losing no time Mick got his waggons loaded and returned to the Transport Camp some three miles away. Here he found all in confusion and excitement. The news has already arrived but no troops were available except a few hastily collected farmers all of whom were almost certainly rebels.

Viljoen with the Head Remount Conductor issued Mick and half a dozen others with rifles and ammunition bidding them ride to Draghoender, to place themselves at the disposal of the Transport Officer there. The Hangman was ordered to take a lightly loaded convoy after the Natal Light Horse.

At Draghoender a couple of score of armed Boers were leisurely making sandbag Defences round two huge dumps of stores brought thus far by train to be transported to Upington, Kakames and other places by road.

Mick though thirsting for an opportunity to see something of real warfare found little comfort in the appearance of his mates. Except for his few Transport Companions, the Defence Force looked hopeless as a fighting unit.

“Guess the moment they hear Kemp arriving they’ll turn us on.”  remarked one  Conductor grinning, “nasty looking crowd of bloody Rebels they look.”

The others agreed and an uncomfortable night past. With rifles loaded and cocked the Transport men watched their fellow defenders who in turn kept well in the shadows. Nothing happened however until late in the morning when Gill with his two attendants galloped in seeking reinforcements.

It appeared that Kemp during the night had ridden into the Natal Light Horse who badly knocked up by hard riding was snatching a brief rest. The Rebels had galloped through the camp killing and wounding a few of the Natal men but losing several themselves.

Royston was now hot on their tracks but freshmen were needed to intercept them on their right ride towards Upington. No men were available, however, and Gill after sending off various urgent telegrams once more took the direction from whence he had come.

Next day the troops passed in thousands train after train went cautiously along the line which was being laid at the rate of three to four miles a day. The country presented few natural obstacles so sleepers were simply flung down the rails, bolted on, and the trains crawled along the new line. Where riverbeds or watercourses appeared the banks were cut out and the train ran down one side and if lucky climbed the opposite one. 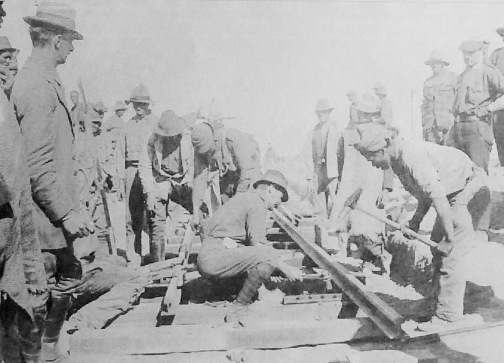 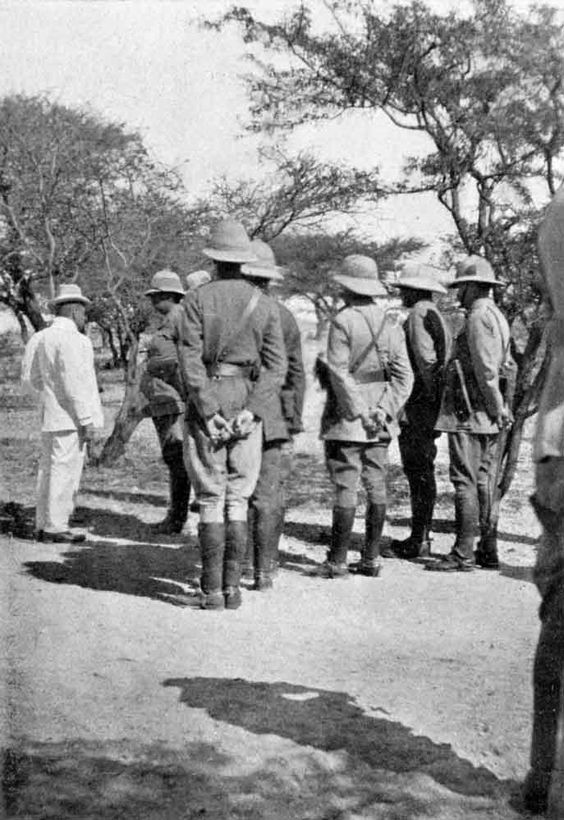 Amongst the passing troops, Mick found scores of old friends and acquaintances, with whom he exchanged a few brief greeting and experiences as the trains halted or crept by.

The same night the Transport Column by road for Upington, the Hangman had returned from his expedition with Royston full of enthusiasm for a soldier’s life. He and Mick though hardly bosom friends got on well together for the rough creature was unable to write his own name had attached himself like a dog to the young Rhodesian.

He had been very repentant over the Prieska incident, humbling himself into the dust. Mick’s temperament was not one which made it possible for him to bear a grudge nor was Mick particularly sensitive regarding either the character or appearance of his friends.

To Mick throughout his life, a man was to be judged purely by frontier standards. Given courage, endurance, ability to be a cheerful comrade, and to be moderately honest in dealing with his own mates there was no reason why one shouldn’t go partners with him, whether he was the Public Hangman or a Missionary.

So Mick listened avidly to the Hangman’s Tales of the fight on the Newbury Estate, accepted a Natal Light Horse rifle one of the two the Hangman had picked up on the battlefield and made up his mind to join a fighting unit on the first opportunity.

And old friend McLeod had been sent to join the convoy. Mick greeted Mac’s advent with joyous glee. The newcomer was a typical example of the British Adventurer having spent practically all his life in wondering about the world doing anything which came to his hand.

He had been a Secret Service Agent, a Trooper in the Cape Mounted Police, had fought through the Boer War in an Irregular Corps, had gone through the Zulu Rebellion and had received a war medal from the German Government for services in connection with the rounding up and capture of Hottentot rebels.

The coming of McLeod, a man of gentle birth, classical education and great charm made a great difference to Mick for Mick was becoming a bit weary of his life and companions.

2 thoughts on “From Boatsheds to Battlefields 63 Confusion and Excitement”