The threatened attack on Upington did not materialize and Mick was detailed to take charge of the telephone at railhead. Here for a week, he stewed in a Turkish bath atmosphere cursing his ill-luck at ever abandoning the original idea of going straight to France.

The canteen was next to the telephone and the evaporation from his body caused by the hellish atmosphere demanded counteraction, Mick’s efforts on the telephone caused dissatisfaction at Headquarters so he was transferred to the charge of the Old Town pont.

The new billet Mick found incredibly monotonous and wearisome. There was no excitement, nothing of interest. The river at the town ferry was broad and deep, the pont substantial and the hawser secure enough to tow a battleship. Sitting on the pont ferrying troops, waggons, stores, animals backwards and forwards possessed little charm for a wild young devil full of temperament and emotionalism and Mick prayed for a change.

One night he slept at the Army pont landing stage – it was a perfect night. There were few rumours and Mick slept peacefully tired with the long weary day. Suddenly the night was shattered by a heavy burst of rifle fire and the boom of cannon.

Mick sprang from his blankets to see the portion of the country above his resting place alive with gun flashes – as he woke a shell moaning through the air burst above him, another followed and another.

So it seemed – the Cape Field Artillery battery opened a spirited reply to the enemy artillery, burst after burst of heavy rifle fire told of troops attacking and defending, a commando armed with Martini-Henry rifles gave a realistic spectacle of old-fashioned warfare, the flame from their black powder cartridges streaming in red waves along their position.

Maxims began to clatter, vicious little pom-pom guns recalled poignant memories to Boer War veterans and shrapnel began to burst over the town. The news came rapidly. Maritz and Kemp their followers equipped by the Germans and supported by German Artillery were attacking with their full force.

Their advance guard had surprised and captured a commando doing outpost and Cossack duty. This command had hardly fired a shot, had been disarmed and allowed to run back to the town. A section of the Cape Field Artillery was rushed to the attacked end of the town supported by a squadron of the only reliable mounted regiment.

The arrival of the two guns and some determined troops had instantly quelled all ardour on the Rebel’s side but our artillery was inferior both in weight and number of guns to the Rebels, few of our troops were displaying any convincing enthusiasm so the issue was very uncertain, any real attack pushed home with vigour and moderate courage could hardly fail.

Daylight was breaking and Mick itching to join in the battle scornfully watched scores of local Burghers finding safe hiding places in the stacks of hay. He was on the South bank and immediately the pont laden with refugees from the town came over he went aboard and crossed to the North bank.

Here a comic interlude was provided by a thousand excited chattering Zulus, Amaxhosa and Swazi who crowding the bank watched with eager interest the progress of the fight. Now and again a shell bursting overhead spat its shrapnel viciously amongst them to be received with a deep-throated “Wow” followed by thunders of laughter, as a score of all but stricken natives leapt high in the air alarmed by the angry smacks and spurts of dust next to them.

“Wow, M’hlega!” roared one burly excited native to Mick “Ask the great Chief to give us sticks and we will hunt the rock rabbits.” A roar of applause rent the welkin – just then Mick saw a cloud of Rebels gallop furiously out of the dunes and ride at the guns –  through the streets of the town rode a regiment hell-for-leather to the support of artillery.

Mad with excitement Mick begged permission to go up to the guns, it was granted and leaping on his horse which was already saddled, Mick raced up with a loaded rifle across his saddle.

The guns were only a few hundred yards away but by the time Mick arrived the spurt of bravery on the Rebels part had ceased. Once out of the dunes into the open country with shrapnel bursting overhead and a great body of horsemen galloping towards them the charge swerved and the Rebels raced back for shelter in spite of leaders flogging them mercilessly with sjamboks. 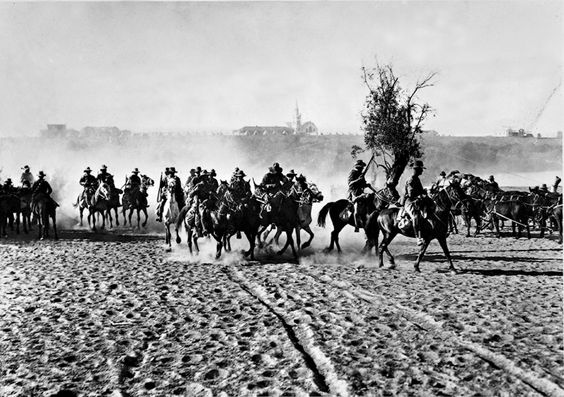 Once again a long-range rifle and artillery duel started. The Cape Field Artillery got a direct hit on a Rebel eighteen-pounder. The loyalist commandoes encouraged by the results so far began to take an interest in the battle it was to end. Twelve hours of an enormous noise, of vast expenditure of ammunition, had ended – some twenty-six loyalists were killed and about the same number of Rebels.

Two thousand desperate traitors were in full retreat and two thousand gallant loyalists pursued them hotly – until the Rebels stopped – when the pursuit ended.  Mick’s first battle with over.

2 thoughts on “Boatsheds to Battlefields 67 Boredom to Battle”