End of 70th Entry: Within a few minutes, every chord and note of fear, anxiety and unhappiness had been sounded in his being.

Clenching his teeth, abandoning all hope, tensed to meet a storm of bullets Mick tore like a  whirlwind up to the steps of a tumbledown hotel. His horse stopped suddenly shooting Mick almost over his head.

And from the hotel, a stout Jew armed with a large bottle of ice cold beer appeared to wish Mick and the arriving Squadron a very good morning.

Amidst roars of laughter, the Squadron Leader cross-questioned the Jew meanwhile detailing patrols to ride around and scout for anything suspicious.

The Jew seemed quite willing to afford all information in his power – a small German patrol had visited him the previous day but there were no strong enemy forces in the vicinity. Everything was quite safe and he was well stocked with spirits, beer, tobacco and cigarettes.

Messages came in from the patrols that no signs of enemy troops could be found and the remainder of the regiment was riding in.

Strong guards were posted; scouts sent out and orders given to the remainder of the troops to dismount and make camp.

Zwartmodder, the resting place occupied was to be shut in to allow a Commander on the heels of the enemy’s forces to dally a while, so after a short rest the troops, having bought out practically the whole of the Jew’s stock of goods, remounted to ride forward to the head of the valley where there was open country, a farmhouse and ample supplies of water. 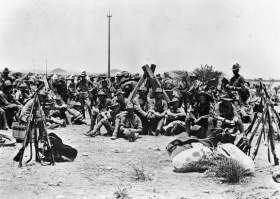 When the new camp was reached the troops for the first time in over a week were given an opportunity to bathe, shave and rest and there was much delay in availing themselves of the luxuries. A couple of restful days past. A strong patrol rode over to the German post of Nakop and exchanged long-range shots with its small German garrison.

Three days after the new camp had been made Mick was ordered to take Girlie the fastest horse in the squadron and ride back with dispatches to the main body of troops some fifty miles away.

Full of thrills Mick started off knowing that there was every likelihood of excitement for the regiment was completely out of touch with the remainder of the Southern Command. No connecting posts had been established, there was nothing whatever to stop German patrols riding all over the country and around the encampment of the 18th Mounted Rifles. The German border was only a few miles away.

Riding down the valley Mick kept a keen lookout redoubling his caution as he approached the Zwartmodder Hotel. All of a sudden he saw a horse tethered in the trees before the building.

Instantly Mick swung his horse off the road and as he did so a man leapt from the hotel verandah ran into the trees and dropped. Mick tumbling out of his saddle sought the cover of a friendly looking boulder, cocked his rifle and cautiously looked around the rock to see a rifle muzzle pointing straight at him.

Mick withdrew his head at a speed which the lightning might have envied and a voice yelled out in Dutch “Which side are you on?”

“Same here” returned the other “Get up and let’s have a look at you.”

“You get up first” answered Mick suspiciously.

After a moment’s hesitation, the other rose holding up his hands and walked towards Mick. He turned out to be a trooper in Mick’s regiment who had slipped away to get a drink but Mick felt very insecure in his company.

There were too many Rebel sympathisers in the Boer squadrons and it behoved a dispatch rider to be cautious in his dealings with strangers. So Mick confessed that he to had ridden over for a drink and the two went into the bar.

The Jew was nervous and earnestly besought his guests not to linger therefore after a couple of drinks the two left. Mick telling his companion that he had received orders to scout around the valley thus finding an excuse for getting away.

Once out of sight Mick made good progress and arrived late that night at his destination where he found the Cape Field Artillery amongst whom he numbered many acquaintances.

Next afternoonMick had been given a return lot of dispatches and left with orders to spare no time on the road. Girlie refreshed and well fed responded gallantly, and in the early hours of the next morning, Mick rode back into Camp. To his infinite grief, the beautiful mare foundered the result of being left standing in the chill night air whilst Mick was kept waiting until the dispatches were read.

Weary as he was Mick with a couple of chums wise in horse-lore worked for hours on the mare. Never will Mick forget the agony of seeing the brave sweet-tempered animal hobbling along on her knees no power left in her forelegs.

He learned a lesson that night which would never be forgotten, as he lay next to Girlie sobbing and praying to the Creator of man and beast to lessen her suffering and restore her to health. Girlie recovered eventually but for weeks she was unfit for service.

Two nights later rumours were busy that a German attack was to be made on the Camp  – extra guards, picquets, and Cossack posts were posted. Mick was stationed on a rather exposed position. All went well until his second guard soon after midnight.

Half dozing Mick was peering into the inky darkness when suddenly he heard a rustle. Instantly awake he silently cocked his rifle every faculty alert. Again came the rustle and a stick cracked in the night – a shadowy form slowly moving like a man on hands and knees appeared.

“Halt! Who goes there?” bellowed Mick and simultaneously his rifle spurted stream after stream of red flame into the night.

The figure crashed headlong into the bushes and lay kicking and struggling – a trumpet blared in the camp from which rose stentorian shouts of “Stand to arms! Stand to arms !”

An officer accompanied by a sergeant and strong-armed guard galloped up the line of outposts towards the scene of the alarm.

“What did you fire at?” he yelled to Mick as the picquet pulled their excited horses onto their hind legs.

“A man crawling on me Sir! I got him and he’s still struggling just over there,” shouted Mick quivering with a dozen racing emotions.

“Get out to him” answered the officer “Be careful he doesn’t get you or hasn’t any mates.”

A moment of silence “Is he dead?” called the officer.

Wildly yelling with laughter the piquet galloped off and their route was followed by an ever-rising roar of ironical cheers.

Next day a troop of picked men from one of the other squadrons was detailed for a long scouting expedition along the edge of the Kalahari Desert and into German West.

The Lieutenant in charge was a Rhodesian pioneer – a man of many frontier wars. Mick went to him with earnest entreaties to be included in the troop and to his joy his request allowed.

One thought on “From Boatsheds to Battlefields 71 Smoke and Mirrors”