End of 73rd Entry: Cautiously the fifteen men representing the five sections of the troop crept up the dune – from the summit they looked down on the Police Station standing still and ghostlike in the lunar rays.

An hour passed then slowly the night began to change to day but no signs of movement could be seen in the buildings. The sun rose flooding the desert with waves of red. The stillness of Death reigned.

“I want two volunteers to gallop up to the buildings and draw the Germans if they still there,” said the Lieutenant at last. “Rhodesia will go I know, eh Osmond?” Mick and a young Dutchman volunteered.

“Get your horses and keep well apart” ordered the Lieutenant. “If they’re still there I’m afraid you lads are going to certain death, but it won’t be forgotten. If they’ve evacuated the post they’re sure to have laid mines or set some devilish trap according to their pleasant little customs so be careful. Don’t enter the building or ride right up to them unless you’re certain the station is deserted. Gallop around and give Jerry a chance to show his hand. If you see anything or hear a sound turn and gallop like hell for the scrub or back to the Dunes.”

The Lieutenant shook hands with the two, took down the addresses of their next of kin, and whispered to Mick that Rhodesia would get full details if the worst befell him.

Returning to the horses the two mounted, said brief prayers trotted around the dune and driving in their spurs raced for the buildings.

The ground seemed to fly past beneath their galloping horses, the wind howled in their ears Mick, yelled Tipperary to the silent threatening mass before them. On the dune summit, the troopers laid fingers on triggers.

Round the buildings swept the two but it was all silent. They halted before the doorway – then carefully examining every inch of ground for suspicious signs Mick dismounting walked up and opened the door.

Once more the elusive enemy was gone.

The others now rode up and for a while, every man except two, who were sent scouting around the vicinity, busied themselves in search of loot. Ample evidence existed that the Germans had been at the station the previous day evidently departing in great haste at the news of the approach of a strong British Patrol.

Many interesting souvenirs were collected Mick unluckily missing most as he and his mate who had been with him in the dash on the station, wasted an hour blowing the office safe open to find it empty.

After an hour’s halt, the Lieutenant once more moved the troop in the direction of a fairly large German town.

That afternoon a big encampment of half-caste Hottentots, the famous Bondelswarts was encountered. These deadly foes of the Germans, well armed and travelling with waggons, flocks of sheep, goats, and herds of splendid cattle had been moving about the Kalahari in bands strong enough to defy any but a powerful body of troops.

The Germans with many bitter memories of former clashes had not attempted to molest them and so far the Half-castes had refrained from participating in the War. They were ready and eager to give any information regarding the movements of the Germans and to offer unbounded hospitality to British troops.

From them the Lieutenant gathered that the Germans were drawing in all small bodies of troops, clearing the country of civilians and evacuating frontier posts, concentrating on the town of Keetmanshoop. One interesting item of news given by the Bondelswarts was that a large convoy of civilians including some English was only fifteen miles away under a small German escort.

The Guide who knew several of the Bondelswarts personally found that his wife and family were amongst the refugees and earnestly pleaded for an attempt at their release. A Council of War was held but the Lieutenant though itching to have an opportunity to do something material felt it his duty to point out the impossibility of conveying civilians amongst whom were women and children back to the road the troop had come.

Eventually, after much hesitation, it was decided to abandon any idea of attacking the convoy and to resume the patrol.

Shortly after leaving the Bondelswarts a nest containing twenty ostrich eggs was found and a great feast of omelette followed.

Another day was spent in riding along the border but the farmhouses encountered were deserted and eventually the horses’ heads were turned homewards.

When the camp was reached it was found that troops, mostly Boer Commandoes were pouring in and that an immediate move was to be made.

The rebellion shattered and finished, Generals Botha and Smuts were intending to push forward the campaign against the Germans with all the rapidity and vigour they possessed. 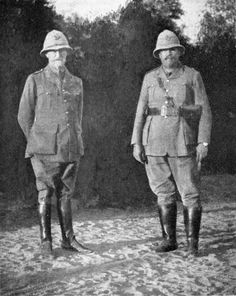 The only photo of the meeting

of General Botha and General Smuts in the field

General Botha himself took command of the Northern Army operating from Walvis Bay. General Smuts directed operations from Swakopmund against the strongly entrenched German position at Aus which blocked the road to Windhoek, the Capital. Colonel Berrangé with picked men rode through the Kalahari to attack from the landward side. General Van Deventer was to advance from the South. 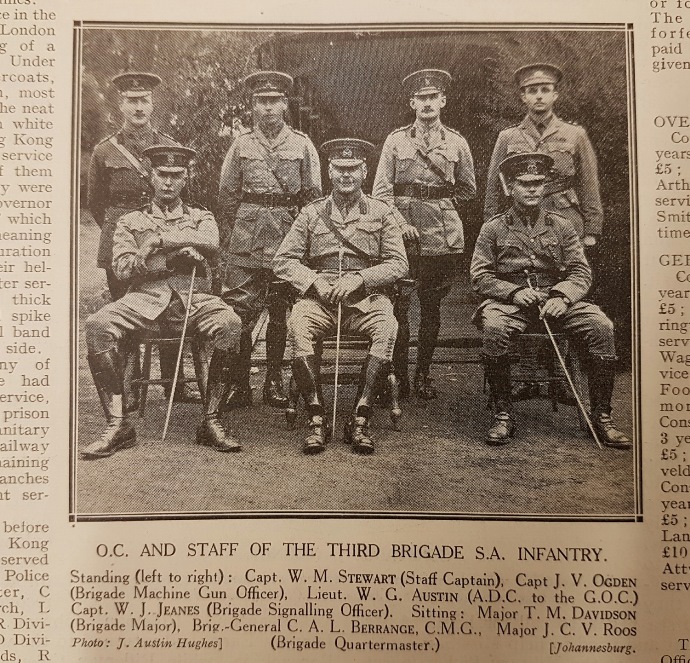 D Squadron hailed Mick’s return with enthusiasm for he was very popular and every man was needed. That very evening the column was advancing to the attack on Ukamas, a German strong point which was supposed to be heavily garrisoned.

2 thoughts on “From Boatsheds to Battlefields 74 Great Omelette Feast”