End of 74th Entry: D Squadron hailed Mick’s return with enthusiasm for he was very popular and every man was needed. That very evening the column was advancing to the attack on Ukamas, a German strong point which was supposed to be heavily garrisoned.

That evening all sorts of rumours began to circulate of a fixed determination of the regiments composing the command not to cross the Border. Darkness fell.

The order came to saddle up and the 18th Mounted Rifles fell in. The bulk of the other regiments refusing to saddle or move. Troopers of D Squadron raging began to quietly slip cartridges into their magazines muttering that they were prepared to attack the others if anyone would lead.

The commands came “Prepared to Mount” “Mount” and like one man D Squadron swung into the saddle. Amongst the other squadrons, the response was varied but the bulk stood sullenly at their horses’ heads.

For an hour D Squadron sat ready to ride, every man itching to open fire on the cowardly dastards around them. Then came the order to dismount and off-saddle.

Next day new regiments rode forward to take part in Van Deventer’s wonderful ride which resulted in the Germans finding their rear threatened, and abandoning their position at Aus. Retiring with all speed the Germans were badly smitten at Gibeon by Colonel MacKenzie with the Natal Light Horse, the Imperial Light Horse, the Umuti Mounted Rifles and the Natal Field Artillery after one of the greatest military marches in the history of warfare.

Meanwhile, the 18th Mounted Rifles, the Midland Horse and various other Cape Colony Boer units rode back to Upington to be disbanded.

After a long dreary ride, the troops arrived back in Upington, D Squadron in a bitter evil temper. No delay was made in disbanding the regiment each man received his pay and two months leave pending discharge.

Thoroughly disgusted with the Union Army Mick proceeded home to Cape Town to receive a wonderful welcome the joy of which was sadly marred by the feeling of absolute hatred of anything Dutch. A hatred which would never leave him.

Mick’s mother was half Dutch, many of his friends and relatives belonged to the race but to Mick, the Boer was tainted. Mr Osmond vainly argued pointing out the wonderful loyalty and courage displayed by the bulk of the Boer race – Mick sneered.

“They know which side their bread is buttered, most of them, but damned few know the meaning of the words Truth or Honesty.

For a few days, Mick hunted around for means to go overseas. He tried steamers for work as a fireman, coal trimmer or deckhand; interviewed relatives for a loan, approached the Imperial Army Officers still in Cape Town but every shipping company was flooded with applicants like himself.

Then one night at the theatre he met an old friend of his Marandellas days then a B.S.A police trooper now Captain and Paymaster of the 1st Rhodesian Regiment. He proposed that Mick transfer to the Rhodesians who would shortly be proceeding overseas as a unit.

Mick welcomed the offer and next day after wiring the 18th Mounted Rifles depot at Kimberly was transferred to the Rhodesians with the rank of Staff Sergeant.

Six weeks passed – weeks that did Mick no good. He travelled to Kimberly to receive his discharge from the 18th Mounted Rifles who were being demobilized – this broke his service as the transfer was for some reason disallowed thus involving a new enlistment in the Rhodesian Regiment.

On his return Mick found himself being everlastingly dragged into bars by a fellow Staff Sergeants and a thousand and one old acquaintances. There was practically no work as the regiment was in German West Africa and with ample leisure, a high rate of pay and numerous friends Mick lived a life of utter dissipation.

Soon wearing Mick applied for and got a transfer into the 2nd Battalion of the Transvaal Scottish gladly relinquishing his rank and pay as a Staff Sergeant to become a private.

Three days later he left for Luderitzbucht with two Officers of the battalion. A pleasant sea voyage was followed by a long but interesting railway journey and at last, Mick was landed amongst a battalion composed largely of ex-regulars of the Highland Regiments.

Three days went by – the battalion received orders to move down to take part in the Grand Finale of the Campaign. Hemmed in on all sides the Germans were at last at bay. The same night came news of the surrender of the entire German forces.

Mick returned with the regiment to Johannesburg via Cape Town.

After a triumphal March through the Golden City the regimental pipes skirling in front they proceeded to a demobilisation camp and a few hours later Mick walked out once more free.

Returning to Cape Town Mick found the 1st Rhodesian Regiment arrived and awaiting orders to proceed overseas – interviewing the Commanding Officer regarding reenlistment Mick was told to hold himself in readiness until definite orders had been received.

Unfortunately, a good deal of dissatisfaction existed in the regiment and a day or two later it was disbanded many of the men returning to Rhodesia which was being threatened by a German invasion – others disgusted with Colonial warfare proceeded to Europe to enlist in Imperial units.

For a few days, Mick picked up the threads of his old Sea Point life doing some mountaineering and fishing. With several friends, he discussed every phase of the situation. All were emphatic that they would not serve again in units controlled by the Union Government or engage in Colonial warfare.

Their hearts were set on Europe but funds were lacking and scheme after scheme of going to Australia, England or Canada to enlist were threshed out and dismissed as impracticable.

Then came the news that a brigade of infantry was to be raised immediately for service in Europe. The brigade was to be equipped and paid by the Imperial Government and the troops to be enlisted as units of the Imperial Army.

The next day Cape Town awoke to find itself placarded with recruiting posters, military bands marching through the town, pipes skirling, processions of veterans of former wars exhorting the fit and young to follow in their footsteps and all the beauty of the Cape calling on men to behave as men. 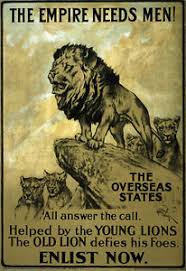 Still in the uniform of their Union regiments Mick, his brother and a dozen chums joined the long waiting queues outside the City Hall – waited hours, fought their way into the examining doctors presence and after many hours suspense and struggling found themselves soldiers in the King’s Army.

The first year of the war was over. Mick, his brother and chums were lusty with life bronzed and well experienced in army life. All had smelt powder, were trained soldiers and now with open eyes, and sober minds had definitely chosen their future course.

They had taken a man’s share in the greatest of all wars and it was due to no fault of their’s that little of the actual clash of arms had come their way. Not one had hesitated a moment as to where duty lay. They had played a part in the land of their birth and now eagerly they went to help the land of their fathers, to the battlefields of their race.

Mick, his brothers and three school chums enlisted together. Two bore Swedish names, one Irish, two Dutch. Three were to lie beneath the poppies of Flanders, one to rest in Brighton’s Hero Corner. Mick to return a man hardly worn by suffering, hardship and captivity.

From Youth, the five entered manhood and a life which was Life, Love, and Battle and truest Comradeship – life in the service of the Red Gods.