“Kommen sie vorwaarts” called the German in a low voice.

We advanced and a voice spoke to us in rapid Dutch asking what we intended giving him to slip us past – Mick whispered a few words and slipped him a roll of German notes – part of the proceeds of our sales, feeling them the Hollander told us to crawl past him and wait. 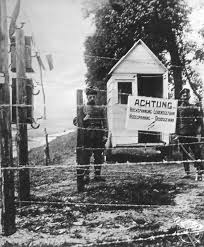 “No tricks or running or I will shoot,” he said.

Thanking the German Corporal and handing him and the sentry some money we dropped on hands and knees crawling quietly in the direction indicated and lay waiting quivering in every nerve.

A few seconds later the Hollander appeared telling us we were safely in Holland but that he wanted a bigger reward for not arresting us. Mick thereupon produced more money asking where we had landed, how we could get to the nearest village, whether we could possibly miss our way and find ourselves in Germany.

“You are strangers from the Belgian border,” he said, “staying with Johannes Van Wijk.” “I knew by your accent you came from near Belguim.” said the guard evidently pleased with his acumen.

He gave us careful directions – the village was only two kilometres away – we couldn’t possibly miss it – No! Germany lay behind us – all we had to do was cut into the road two hundred meters to our left, turn right and walk straight on.

Rising shakily we grasped hands and set-off – how we contained ourselves God alone knows but both were scared of any chance of dirty work at the Cross Roads. Our deliverer was too pally with the German forces to take any risks.

Once in the main road Mick gave a squeal of joy – we clasped one another knelt and said a prayer of gratitude, then strode off filled with longing to shout, howl and dance.

Dawn was breaking when we entered a quaint Dutch frontier village.

One thought on “From Boatsheds to Battlefields 79 The Final Chapter”