‘Fifty million Cash Customers’ was the caption of an article in the Textile Weekly at the time, when Manchester and Birmingham were reeling under the onslaught of Japan into the Truck markets of the world. Those fifty million customers are Africans up North and today thousands of South Africans know them and the roads to their homes.

Inside the Ishikawajima / Wolseley Fukugawa factory circa 1923, things were… rudimentary…

When the South African Iron and Steel Works turn from making cannon to making ploughs; when instead of munitions we produce thousands of miles of fencing, baling and other wire; when South African axes, hatchets, hoes, spades, and shovels and every manner of agricultural, mining, railroad and artisan requirements are being produced, then surely there will be employment enough for every South African and very many would gladly fare again North. 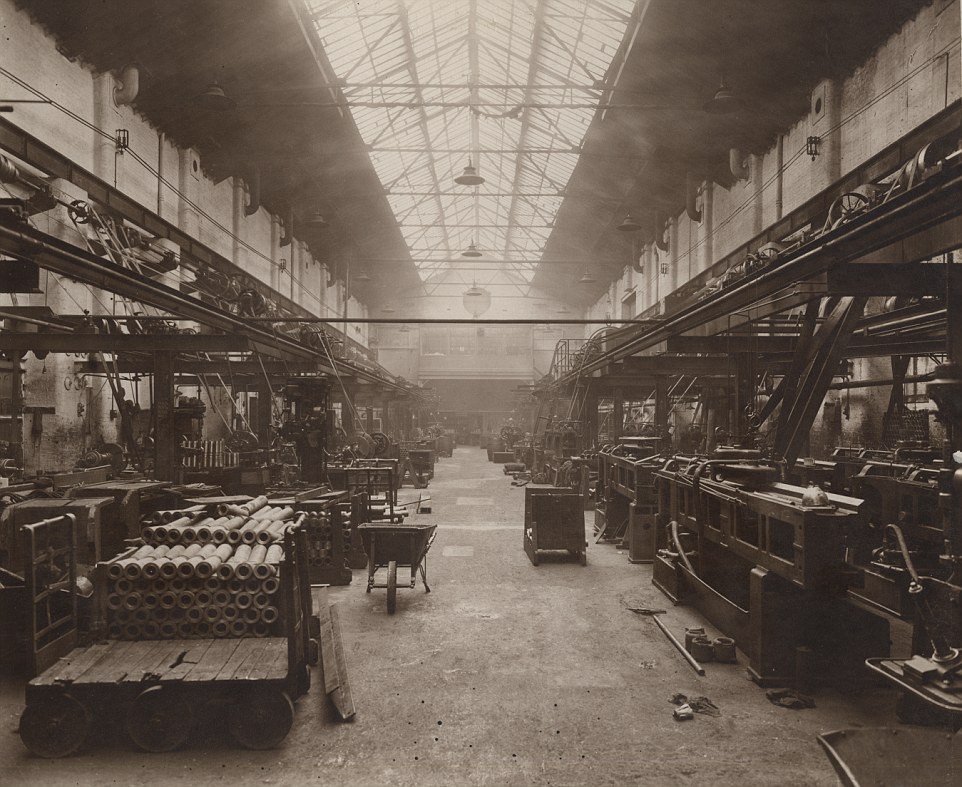 Field Marshal Jan Smuts has promised a Reconstruction Ministry. Let us pray that it will be granted the powers of the Wartime general staff and it’s personnel be selected without fear or favour from the ranks of hard-headed businessmen.

Let us take stock of what we have and what we require. South Africa is a vast country with no great extremes of climate. A European can and does live healthily anywhere in the Union even if in some areas there is a need for malarial precautions.

In the Union, almost everything required by man or beast can be produced on a large scale. Almost every possible industry has been partially or well developed.

We have the biggest gold mining industry in the world iron, our Iron and Steel Works are already a great, rapidly expanding source of wealth and employment, and there appear hardly any limits to its sources of material or markets.

Almost all valuable base metals exist in commercial quantities and can be worked profitably. We are the source of the world’s greatest production of diamonds and our coal deposits are of excellent quality and quantity and already in full development.

From mining let us turn to the Industrial life. The Union’s population today is fast being drawn off the land not only to mining but to factory employment. Jam making, canning and drying fruit biscuit manufacturer, boot and clothing making, soap and scent production, tinning fish, – what industry isn’t in production in the Union? What isn’t, could be developed, given the trained personnel and the equipment.

Where can the Union find profitable markets and who will search for them, transport to them, distribute in them? The answer is easy.

Up North is the market and commercial travellers, truck drivers, warehousemen, market agents, clerical staff are on hand now in the army. Where can goods in bulk be sent to? Why not to existing base and training camps up North?

There are of course other States to be considered, but if Trade Agreements can be made and our trading convoys and trains return loaded with their produce and we study and follow the commercial attitude of the United States to Canada no difficulty should exist.

There’s certainly room for us all. Even the creation of a Great Central African Union of Rhodesia, Kenya, Uganda and Nyasaland, ought to be of incalculable benefit to the Union of South Africa in the Union of obtaining raw material to supplement her own resources and in supplying the North with manufactured goods and even in helping to industrialize the North.

We turn to Agriculture. To the Stockman and to the farmer; the greater the mining and industrial development the better his position. The farmer wants markets. There is hardly any product the Union farmer can’t produce on a commercial scale provided there are profitable markets for his produce and the markets exist.

When scarcely a newspaper issue is free of some report on malnutrition when statistics show a large percentage of South African whites, as well as Coloured and Natives,  are living without sufficient nourishing food something is radically wrong.

The position is made worse by the scandals of millions of pockets of oranges being destroyed, markets flooded with potatoes and fruit, lack of milk and egg producing foodstuffs.

We have the raw materials, the factories, the foodstuffs, the personnel to mine, produce, grow and manufacture. Why on earth should any man, woman or child in the Union not be properly fed, clothed and housed? Could any sane person visualise the South African Army being allowed to go short of food, clothing, equipment and housing? Why then should the civilian population?

There can only be one logical answer and that is that the people of South Africa in Peacetime are ruled and handled by the wrong people.

After this War, we must get down to Bread and Butter politics. We must “cut down the cackle and get down to the ‘osses.”  How are we to do it?

Only by every voter demanding a pledge from his or her parliamentary candidate that he will disassociate himself or herself from dreamland and pull his or her full weight in bettering the lot of people.

We want and must have more women in Parliament – women of the masses, women who have the interest of homes and children in their hearts. We must sweep away vested interests which lock up foodstuffs, clothing and housing.

Why should there not be a municipal market in every suburb? Every suburb has its Post Office and most certainly should have its Market Hall where wives and mothers could buy fresh fruit and vegetables sold in small lots by municipal auction direct from the producer.

Do away with that market abomination selling by ‘Balance‘. What housewife wants to be crushed and jostled by a crowd of middlemen only to find the auctioneer is letting the greater part of the produce go ‘in balance‘ lots to them.

In Wartime no problem is insurmountable. When war broke out the Union leaders did not sit down holding their heads in their hands wondering how to build an army, how to equip and staff one, how to arm it or how to use it? Government heads got down to real solid brain work and did what had to be done. Why not in Peacetime?

Immediately after the War, our leaders must get down to essentials for the welfare of the people. What the Reconstruction Cabinet is really faced with is the necessity for fully equipped and staffed hospitals to handle every invalid in the Union. The hospital staff and equipment of the military converted to civilian requirements would practically solve this question and provide for a fair percentage of ex-Servicemen and women requiring employment.

Municipal suburban Market Halls could absorb quite a few working at present in Army Quartermaster’s stores, communal feeding the poor school children would find employment for quite a number.

The Police Force needs strengthening and really wherever one turns it seems that a few more men or women could be employed advantageously.

No matter how one’s brain twists it comes back to the fact that in Peace as in War profits must be controlled and limited and that profits must be earned. Exploitation of the credulity of the masses must be dealt with drastically. The buying and selling of stocks and shares must cease to be more speculation than investment.

One thought on “The Soldier Returns to What?”