End of Part 1: Perhaps it had broken the wedge and pushed the bottom half deeply into the material.

Nobody in the District but Mr Baird believed that there remained a portion of the reef below the granite but as only Mr Baird owned the mine and was paying for the exploration nobody interfered with his search nor discouraged his theories – It was nobody’s business but Mr Baird’s.

Breaking hundreds of tons of solid rock four hundred feet below and hauling it to the surface of the earth is expensive work. When there is a streak of other rock containing gold amongst the broken stone it is certainly worth the expense, always provided the gold is sufficient in quantity and in a form which is not refractory to ordinary methods of gold extraction.

The Baird reef was free of arsenic, antimony and other bugbears of the miner. So it’s owner had never worried about the cost of following it into the earth breaking it from the rock in which it was embedded and bringing it to the surface nor did Mr Baird grudge the cost of crushing his ore into powder or of washing it over the shaking copper plates.

The yellow gold which mercury would catch from the agitated mass paid all the cost of mining and left a good deal over to pay the cost of a pretty daughter and all the comforts Mr Baird wanted.

But when there was no milky stone there was no gold and Mr Baird was distinctly worried. True it would take a year or two to break out all the quartz above the granite and there was another year’s work in recovering gold which had escaped the mercury and would only yield to cyanide treatment.

Two courses lay before Mr Baird – one to acknowledge that his reef had come to its natural end and to concentrate on cleaning up – the other to gamble. Mr Baird decided to gamble.

Eric Ferguson stood at the headgear of the Mascot with a boyish figure in oilskins.

“Not scared, Eunice?” he asked as a wet little truck emerged from the shaft. A remarkably pretty girl shook her chestnut hair as she clambered in.

“No fear – I like going down a little property – the Baird’s like Dad a bit too imposing.”

“Anyway hang on – we’ll go right down to the 5th level, the boys should have cleared away the night shift’s blasting. I’m into some pretty stuff. Jove Eunice if only the blessed reef would widen a bit.”

Down into the darkness dropped the truck and the miner slipped a protecting arm about the slim shoulders a small hand felt and found Eric’s hardened calloused one – In the mirk and drizzle of the mine shaft, a girl’s soft lips met her lovers’.

Down ever down sped the truck its steel rope singing to the winding drum above in the tiny patch of yellow that marked the surface.

No. 2 Level – No. 3 – No. 4 – With a jolt, the truck halted and a brawny native wet and clay covered grasping Eunice helped her to a wooden platform – a signal and the truck dropped into the darkness below.

“We’re down another 100 feet – just beginning to drive.” said Eric “We’ve worked out the first 4 levels and have just really begun to stope out the reef in this – the fifth.”

“Yes, what is it Boy?” as a perspiring grinning native spoke asking the Boss’s attention.

“Come on Eric” cried the girl snatching a candle from a ledge of rock “Hamba Boy, hamba pambeli“.

Grinning the native turned and trotted into the darkness the boy and girl behind.

“Eunice, will you keep quiet about it until I tell you to loosen up?” Eric’s voice though quiet held a worried note.

“Sure. But Oh! Eric! I thought you’d be dancing with delight – the reef’s as big as the old Baird and looks perfect – Poor Old Dad – he’s a broken man since the Baird pinched.”

Eunice gazed dumbfounded at the great mass of white gleaming dully through the dark. 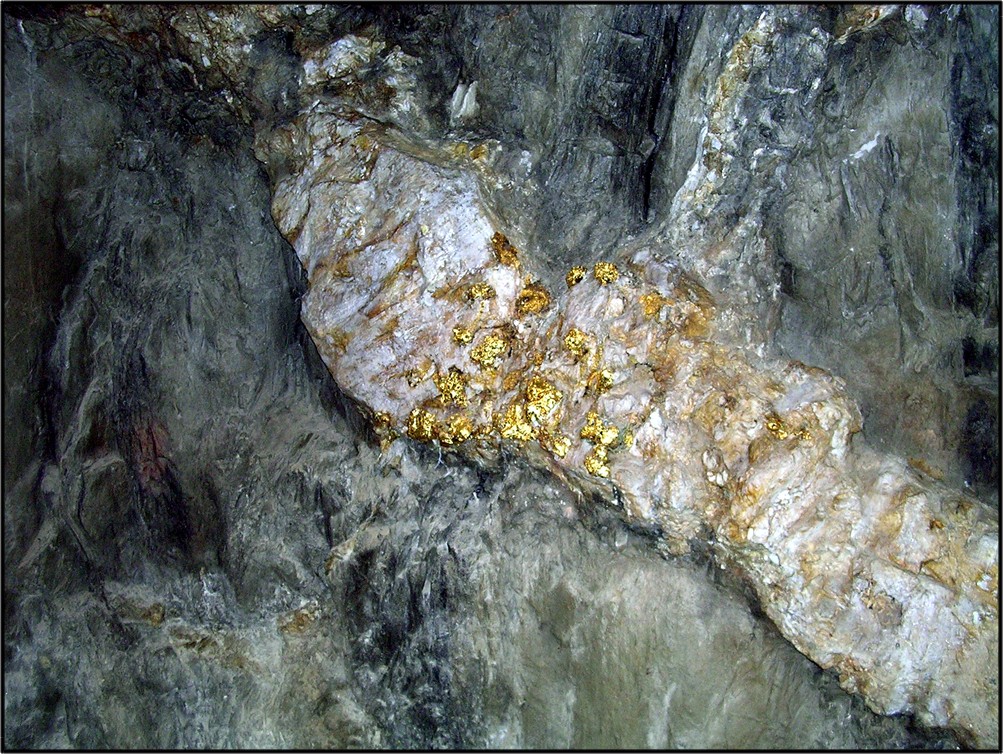 “The Baird Eric?” she gasped.

“Aye – a wall of granite broke its thread and pushed the reef over into my claims.”

“Then it’s yours now,” murmured Eunice drawing close against her lover’s form.

“I’m not too sure,” muttered Ferguson, “There’s a clause in the Rhodesian Mining Law about extra lateral rights – if two distinct reefs are being developed on adjoining properties the owners can follow their own reef underground right into one another’s claims. I’ve never heard of it happening but that’s the law.”

“Oh, Eric” cried the girl “if Dad gets the Baird again I’ll be forced on Colin.”

“Your Dad hasn’t got the Baird yet – it would be a deuce of a thing to prove anyway – and he’d have to prove it from his side of the mine,” said the miner grinning.

“He can’t come down my shaft, walk into my drive and say “Hullo there’s the Baird – I’ll start a  shift on it right away Fergie me boy.””

“I see” Eunice looked thoughtful – “Eric can you raise a couple of thousand?”

The miner shrugged his shoulders – “If I had something to show, yes.”

“Has he stopped looking for the reef Eunice?”

“Closed down yesterday and is taking the pillars out from tomorrow.”

“Then there’s no time to waste – I’ll take some samples and we’ll get up.”

“Then you’re prepared to give me a months option on the property Mr Baird?” Eric looked with pity on the man whose twelve-months fruitless hunt had made him look the four and seventy years he’d lived.

“What do you want her for Eric – think you know how to find the reef?” a sneer crossed the speaker’s features. “I guess no Ferguson will succeed where I’ve failed.”

“I’m reckoning on pickings – the Mascot’s widening and needs a five-stamp. What with pillars and stringers I reckon the Baird’s got four or five thousand in her – thought £2000 was a good price and I take the one battery over on twelve-month credit – together with the big boiler.”

“I’m not a philanthropist – but you’re fed up with it and I doubt whether there are many buyers.”

“Had two fellows out this morning.”

“Aye! They told me they weren’t doing anything.”

Bair snorted “Have you the money?”

“Aye” – lifting a bottle on the table between them Baird poured two measures of whiskey and pushed a siphon to his guest.

“Take a trip down the Mascot, Mr Baird – I’ve a strange problem at No. 5 Level.”

“To Hell with mining,” answered the other – “I’ve no interest in it.” and the old mine-owner’s head dropped on his breast.

“Come on Daddie” called a fresh young voice “I promised Eric I’d go down and he’s awfully eager to show you the reef.”

Protesting yet curious Baird walked with his companions silent but observant – now and again his eyes rested kindly on the fair girl chatting merrily with the powerful clean looking man.

“She might ha done worse” muttered Baird “Colin’s no altogether her sort – bit dour and wantin that girl from the hills.”

Down into the bowels of the earth rumbled the skip – past the levels stripped of their ore to the one where fresh stoping was beginning.

“She’s opening up a bit Eric,” remarked Mr Baird gazing curiously about him “Ten years since I’ve been down – good little property she’s been £300 a month for fifteen years isn’t a bad output” agreed the Mascot’s owner – But what do you think of this Mr Baird?”

Turning a corner of the drive the three were next to a great mass of quartz at which a dozen natives were busy.

“The Baird The Baird” shrieked the old miner stumbling to his reef.

Eric his arm about the girl drew next to the kneeling figure feverishly working at the rock face.

“What’s it you’re wanting Ferguson – it’s my reef I tell you – I’ve got lateral rights Ferguson – that deal about the Baird’s off you scoundrel.”

“Steady on Mr Baird I was only joking or I wouldn’t have brought you down – its Eunice I’m wanting.”

The gaunt white-haired figure covered with clay and mud rose to his feet.

“We’ll go halves in the Baird Fergie – you’re a white man – and I’ll chuck Eunice in to clinch the bargain.”

Baird held out his hand.

Copy of the original in Bernard’s handwriting

One thought on “Rhodesian Mining Law and a Wedding”