End of 72nd Entry: His comrades sleeping below were they and himself not causing many a sorrowful heart amongst the Angels of God?

Mick fancied he could see the slumbering forms of German soldiers their spirits dreaming of; perhaps in communion with those of other sleeping ones in far-off Fatherland – mothers, wives, children, sweethearts. Mick shook himself – “Hell I’m getting soft!” he murmured to himself.

“All through the world, it’s the same – there’s many a lovely moonlight picture in Rhodesia at this moment – a herd of impala perhaps drinking at a river ford amidst palms and jungle and old whiskers lying in wait next to the game path. All over the world in the most exquisite spots of Creation are lurking the Beasts of Prey and what after all is Man but the biggest Beast of the lot?”

“It’s all Written and Great as God” as old Abdul used to say in my old fishing days.

Dawn broke redly over the desert and silently the soldiers mounted following in single file behind the Lieutenant and the guide. Orders were given that at the troop left the shelter of the dunes each man was to instantly gallop at the farmhouse; extending as they went, the end files to race around either side of the house until a circle was formed.

No hesitation was to be shown regarding shooting – “Follow Osmond’s example and reckon it’s safer shooting a calf then risking making a mistake” said the Officer laughing.

The distance to the farm from the edge of the desert world was about a mile – Mick on one of the wings had nearly twice that distance to cover and the ground was rough but filled with excitement he reeked nothing of risk – the cold morning air streaming past, the sound of four score hooves thundering through the silence of dawn, the feel of powerful muscles working under him sent the wild Irish blood racing through his veins.

It would have been a glorious gallop under any circumstances it was the grandest gallop given to a horseman under these – a cloud of cavalry racing into the attack.

But German West was a war full filled with battles – as faced the charge on Zwartmodder so fared this no crash of musketry, no hastily awakened armed men pouring out to meet the charging troop – only an open doorway and a weeping wailing huddle of womenfolk and children.

The soldiers swept up to the house – every No. 1 and No. 2 leapt from his horse the bridles been caught by the No. 3s.

“Fix bayonets! Sergeant! Double inside and make a thorough search – don’t waste time on anybody who doesn’t surrender but bayonet him.” shouted the Officer. Mick and two others followed the Sargeant pushing the screaming women out of their way -the Sargeant posted one man in the passage, sent Mick into one room, the other into a second and himself taking the last.

Mick dashing the door open with the butt of his rifle rushed into a room evidently belonging to two girls. He looked under the bed, threw open a wardrobe, looked behind some hanging garment but found nothing. On the point of departing, he heard a scream from the adjoining room, charging in he saw the Sergeant with open mouth gazing at a heavy bundle of washing – even as Mick entered a form disentangled itself from a  mass of garments disclosing a white-faced elderly man.

“Hell,” said the Sargeant expectorating “I just kicked the damn bundle on the off chance and Bless My Soul found Uncle – “Any luck Mick?”

“Well come on Uncle! nobody’s going to hurt you if you’re a Christian.” Escorting the prisoner the two went down to report the house clean of enemies.

On rejoining the Officer they found he had quietened the womenfolks’ fears and after closely cross-examining the prisoner the Lieutenant ordered his release.

Guards were posted after which the troops were told to off-saddle and rest. It appeared that a German patrol of three men had visited the farm two days previously but that except for half a dozen men at a frontier station called Dabinab there were no enemy forces within twenty miles.

So the farmer assured the Lieutenant and the Guide vouched for him as being strictly neutral with sympathies if anything on the British side. In any case, the farm command a wonderful view of all the country except the Kalahari so two men were ordered off to post themselves on the big dune behind which the patrol itself had hidden and with one more on the lookout from the house roof the others took advantage of a golden opportunity to feast and flirt.

Mick found both the girls had been at a Cape Town school and knew many of his pals. There was a piano and the girls were only too willing to sing, dance and be friendly. Their father proved an entertaining companion to the Lieutenant and Guide and the mother busied herself in baking bread, preparing food and giving of her best to the soldiers.

At sunset once again all swung into the saddle and with laughing farewells took leave of their hospitable friends.

Fully realising that most probably their departure would be instantly taken advantage of to send a warning to the Germans, the Lieutenant wasted no time. Clattering past the stones engraved with the Prussian Eagle which marked the German Frontier the men now full of excitement were sternly ordered to keep silence, and as soon as possible the troop was turned off the road into some dunes where once again the Kalahari rolled into the land.

Straight for the Southern Cross rode the troopers ever deeper into the wild lonely desert which in great mountain waves rolled away into what seemed infinity.

A whisper from the Guide brought a stern order that every precaution should be observed regarding silence – once more the troop swung round from their route.

“We will ride straight for Nababis now,” said the Lieutenant. 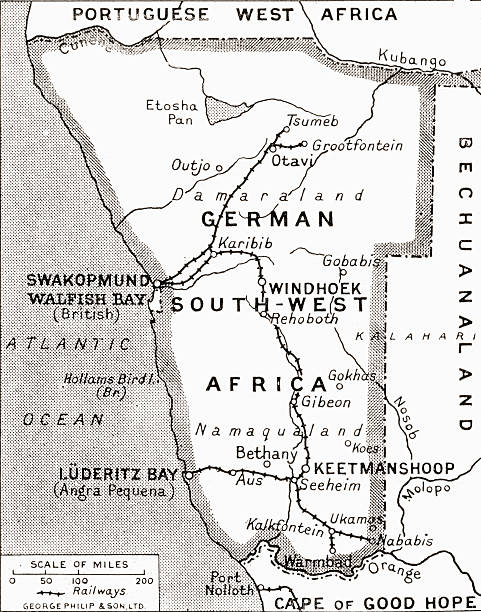 Riding slowly and silently the troop followed the Guide through the trackless waste until behind a line of dunes a whispered order came to dismount.

Once again the No. 3s held horses whilst the others gathered around the Officer. “We will extend to four paces, crawl up the dune and the German Camp lies about three hundred yards below. Every man is to remain dead silent. When daylight comes the Germans are sure to come outside – when they do, keep as quiet as possible. I want to wait until the whole lot are moving. I believe there are five or six men there. If several come out I’ll blow my whistle – instantly give them five rounds rapid and then the No.1s and 4s fix bayonets and follow me. If I’m shot the Sergeant will take charge – whilst the No. 1s and 4s are charging the No 2s under the Sergeant will keep up rapid fire at the windows, doorway and any sign of life.”

Cautiously the fifteen men representing the five sections of the troop crept up the dune – from the summit they looked down on the Police Station standing still and ghostline in the lunar rays.