End of last entry: But chaff was wasted on Morag at the mention of their goal being in sight.

The car had topped a rise and from it, the party looked down into an immensity of space broken by countless low hills and wooded basins. Slightly westward of a long curving range stood a great solitary hill crowned with white cliffs. Anderson brought the car to a standstill.

“Taba Mhlope – The White Mountain rather a decent view isn’t it?”

Morag spell-bound held her breath gazing into the fast extent of wooded country. “Oh, Mollie” she murmured as the car shot on ” I never thought – I never dreamed a land could be so immense, so lonely.”

“Dashed good shooting down there I should think.” came Reginald’s voice.

“Pretty nearly everything,” answered Mick “but the cattle are driving the game out. That’s our company’s ranch. They’ve got a hundred thousand acres and about ten thousand head of stock running on it. Not nearly as good cattle country as where we are Mrs O’Connor!”

“Not a bad idea,” rejoined Mick, a note of deep sincerity in his voice and Morag felt the warm blood coursing tumultuously through her veins.

“Dashed uncivilised place for a bride to live in though'” declared Reg, “All right for a lark but dash it all one would soon start getting bored.  Wouldn’t she Morag?”

Mick glared venomously at Reggie the while he waited anxiously for Morag’s answer.

“It depends.” was the noncommittal reply but Mick’s heart leapt at the softness and shyness of her tone.

“Quite right Dear,” joined in Mollie O’Connor “Dennis and I and scores like us haven’t found it boring but pull up Jock here’s Bankwe Main Camp and I must tidy myself. Heavens I hope the Robertsons won’t think it strange my coming out. I’ll have to explain that I thought it a good opportunity to visit them. Jock, I think I’d better stay and you can pick me up on the way back. One never knows what weird yarns fly around these ranches.”

Anderson grunted. The same thought had struck him. Headquarters staff would wonder quite a lot at a manager’s wife from a sister ranch flying out to look for gold mines on one of the company’s stations.

“Good idea, Mollie – Now Miss MacDonald you start your new life – Write out a notice addressed to the Manager Zambezi Pioneering Company’s Mapeti Ranch informing him that by virtue prospecting licence No. 01 you hereby give notice that you intend prospecting on the ground under his charge.”

Flushed with excitement Morag hunted for a fountain pen and writing pad whilst Mrs O’Connor attended her appearance and the men took Ruarií to stretch his legs.

Ten minutes later the journey was resumed and in a short while after the party were being warmly welcomed by Mr Robertson, the tall grizzled ranch manager and his wife, a little-worn woman, whose appearance brought a pang of pity to the Hebridean girl’s heart.

“We’ve only stopped to drop Mrs O’Connor and serve you with notice that Miss McDonald and Mr Lumsden intend prospecting on the ranch. Osmond is bringing you a mob of cattle and is taking a run out with us whilst the stock are resting.”

“Five minutes and a swallow won’t hurt you, Anderson. Come along in. What are you bringing Osmond?”

“And I suppose half a dozen new diseases” finished the ranchman his eyes twinkling.

Half an hour later amidst a chorus of laughing farewells the party minus Mrs O’Connor left, Morag’s ears still tingling with roars of laughter which is had greeted Anderson’s explanation of her quest.

“Mac’s Mine! Lord Miss MacDonald, I’ve had prospectors of all sorts around Taba Mhlope every year since I’ve been here. My own natives and cattlemen have ridden every inch of the country and if ever there was a mine the natives covered it up and the old needle in a haystack would be easier to find after all these years.”

An hour’s run through what seemed a gigantic park where red bodied white-headed cattle grazed in hundreds brought them to the foot of a huge hill. Now and again glimpses had been caught as the car topped on one of the countless ridges which traversed the country but the realisation of the magnitude of her task came to Morag until Anderson stopping brought his arm round in a circular sweep. 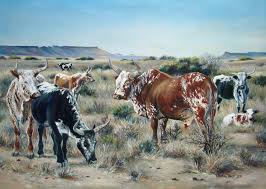