One of Mick’s most thrilling encounters with game however was, when accompanied by two half-grown dogs, a cross between red setter and water spaniel, he put up a full-grown reedbuck ram and let it have a charge of birdshot. The buck stumbled and like a flash the two dogs were on him – he threw them off but Mick with a wild yell flung himself on top of the now seriously annoyed buck who with a vicious swing of his horns caught Mick a glancing blow sending him bruised and winded in the river – the dogs half frantic with joy had taken full advantage of Mick’s assault and rushing in secured holds.

The reedbuck now on his feet attempted to plunge forward but the dogs held – with a quick twist the maddened animal knocked one dog away with his horns tearing a long gash in the pups flank – as the reedbuck struck at the other Mick panting and wet once again dived at him only to get a hind hoof fair and square in the chest – down dropped Mick but the wounded dog again fastened on – the other dog let go – the reedbuck dashed forward and the free dog having got his breath again sprang for a hold whilst Mick undauntedly hurled himself for the third time on his quarry.

A desperate wrestling match ended in an exhausted antelope, two dogs and a man lying sobbing for breath the buck watching his enemies they keeping wary eyes on him – once again he made a plunge forward – down he went with three frenzied tacklers on top – again all rested and Mick stealthily drew a hunting knife – at his movement the buck again attempted a dash but this time the long cruel knife bit deeply into his throat – madly he struggled but with the ferocity of a savage Mick sawed and with a gurgling moan the noble beast began to weaken as the streams of blood spurted from severed vein and artery. Another powerful slash of the keen knife and with glazing eyes the buck rolled over conquered.

Hunting either alone, accompanied by a native or with Tom was Mick’s ruling passion though once having tasted the joys of dropping a bird on the wing he became less enamoured of the rifle. Redwing partridge, wild duck and geese were his favourite shooting and during the maize harvest, he was seldom without a gun.

For a thoroughly enjoyable morning, however, Mick yielded the palm to a big drive – the long line fo guns and beaters advancing through the maize and dense reeds – the barking of a hundred dogs mingling with the shouts of their owners. The cries of Mark Right – Mark Left accompanied by a blaze of rifle and shotgun fires as buck or bird dashed along or whirred over the line kept him in roars of laughter and thrills of tension. Many of the guns would blaze away out of sheer excitement or devilment whether there was a chance of a hit or not.

Mick was receiving a small salary and a percentage of profits. The tobacco and maize yielding well Mick found that for the first time since leaving Grahamstown he was possessed of quite a handsome sum.

On engaging him Godfrey had arranged credit terms in Salisbury so that Mick had been enabled to stock his wardrobe and later buy a bicycle – besides keeping himself supplied with ammunition, tobacco and little luxuries.

After the second crop, eighteen months had passed on the estate and two and a half years since he bade his last farewell to the sea. The crops had not only been heavy but had realised high figures the tobacco realising an average of well over two shillings a pound. Godfrey well satisfied with his year’s results gave Mick a holiday and advised him to go off home for a month or two.

Filled with delight Mick went into Salisbury, cashed a handsome cheque booked his passage to South Africa and went up to the old Commercial Hotel for a drink.

End of 40th Entry: Mr. Tracey after a month called the lad into his office.

Quite kindly, he held a post-mortem on the past month as regarded Mick’s share – told him he was a likable lad, abounding with energy and with a fair amount of ability at handling stock and implements.

However he had engaged Mick as an assistant manager on a big business proposition – Mick knew absolutely nothing of bookkeeping or clerical work, had no control over native labour, had shown no initiative and was far too young.

He was sorry but he did not want a pupil, had no position as a farm foreman and his only requirement was that of a fully qualified farm manager.

In accordance with their agreement, he would pay Mick three month’s salary and thought if convenient Mick might leave the day after next when he would be going into town and could give him a lift in.

Mick stumbled out his eyes misty and his heart like lead. He had revelled in the life – plenty of riding, chasing cattle and ostriches, the perfect scenery in which it was a neverending delight to work – friendly charming people and the best of meals and comfort.

In his bedroom the lad throwing himself on his bed mournfully reviewed the position – in a couple of weeks there was going to be a big springbok hunt – hours of wild excitement with galloping like blazes over the soft springy turf after a herd of bounding flying buck – shooting from the saddle, pulling up to leap off for an opportunity to pick off some of the herd driven down by a line of racing horsemen.

Then there were a couple of Bushbuck drives coming with plenty of risk from a savage devil of a wounded ram and chances of seeing a bush pig and perhaps even a herd of Kudu.

Apart from the hunting, he loved the work especially the luncheon hour which he generally spent at the lands miles from the homestead – here along the river fringed with massive trees half buried in monkey ropes, wild mistletoe and ivy one often saw the Springbok gazing in the luscious river grass or spotted a duiker or steenbuck daintily nibbling at some choice titbit. 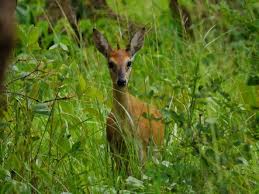 Then the wind crags, the sea of bush stretching down to the Fish River – the native kraals perched on the steep hillside – he simply couldn’t leave it all.

Early next morning Mr. Tracey with kindly thoughtfulness told Mick to take a rifle and get into the bush to see if he could find a buck.

Armed with a double-barrelled combination gun – one barrel fired, the other smoothed bored, Mick plentifully supplied with ammunition went forth. At Carnarvon, he had done some shooting but hares and Namaqua partridges had been the only game on the farm whereas now he was venturing into the heavy bush which was known to contain leopards, Cynx, kudu, bushbuck and a score of other species of game – even buffalo had been seen now and again.

Taking off boots and socks Mick stole from tree to tree thinking every Red Indian tale he had ever heard. Sometimes he lay for what seemed hours on the fringe of a tiny glade – other times he crouched long in the shadow of a tree – again and again, an opportunity presented itself – a tiny blue buck, smallest of all the antelopes, a troop of guinea fowl, bush partridges, innumerable pheasants even red steenbok and grey stealthy duiker. But Mick scorned the small fry. He was going to get a leopard, kudu or bushbuck or perhaps a buffalo – nothing less would content him and his heart’s desire came to him – all of a sudden he found himself almost in the act of treading on a sleeping bushbuck ram.

It speaks volumes for the lad’s scouting ability that he was ever able to get as close – but to actually catch the shyest of all game and the most sensitive of forest creatures asleep was an almost unparalleled feast.

Mick saw the bushbuck at the same time that the bushbuck saw him – up went the gun and as the cartridge exploded one hundred and sixty pounds of pure undiluted devil armed with two curved pointed horns charged in one desperate leap – Bang! spoke the other barrel and with a heavy bullet and a charge of buckshot at a range of perhaps three yards the beautiful black bodied, white-bellied antelope driven out of his course by the heavy impact crashed head down a few yards from Mick. 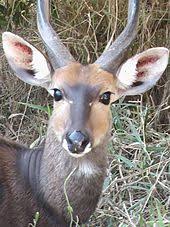 Mad with excitement the foolish lad dropped his gun and drawing a heavy sheath knife flung himself on the animal – fortunately it was stone dead or Mick’s career would have ended there and then.

Filled with joy and pride, full content to once more place himself in Fate’s hands Mick returned to the homestead no longer worrying about anything.

Next day a precious pair of beautiful horns safely packed Mick said goodbye and two days later laughing with happiness climbed the gangway of a Union-Castle Line in Port Elizabeth saying to himself, “Anyway I’ve seen the Eastern Province, shot a big bushbuck ram and have a good sea trip in front – I’ve bags of clothes, a damn fine riding kit, and five quid over.”

“I guess I know a bit about the world now so I’m going to Rhodesia and I don’t care a hang what anyone thinks.”